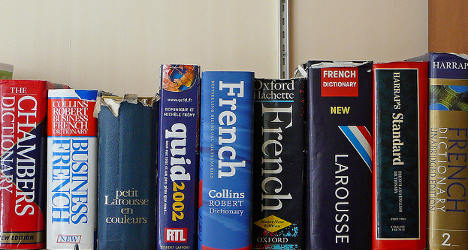 If tensions weren’t already high enough, the writers of France’s esteemed Larousse dictionary appear to have unwittingly poured oil onto the fire of France’s divisive gay marriage debate by including a reference to same sex unions in the next edition of the reference book.

In the 2014 version of the dictionary, which is due out in June this year, the definition of the word marriage has been altered to make reference to homosexual couples.

Previously the word “marriage” was defined as a “solemn act by which a man and a woman establish a union, whose conditions and dissolution are governed by legal provisions in their country.”

But Larousse’s new definition now states marriage is a “solemn act by which two persons of a different sex or the same sex establish a union between themselves.”

With the French Senate set to adopt a gay marriage bill in the coming weeks, some observers might be inclined to credit the dictionary writers for their forward thinking.

However opposition UMP deputy Hervé Mariton, one of the staunchest opponents of the bill, is outraged and has called for a boycott of the edition.

“Such a contempt for democracy must be condemned,” Mariton said. “It’s clumsy but also very stupid. They have explained that they have modified the word in anticipation of the gay marriage law, but it has not even been voted in yet.

“It’s anti-democratic and shows contempt for the work of parliament,” the furious MP added.

“This is not normal because the work of the law is not finished,” he told Canal Plus television.

After coming under fire, bosses at Larousse released a statement on Wednesday defending the move saying it does not suggest they “have taken a position in the on-going debate”.

They claim to simply be acknowledging the fact that the concept of marriage has altered in many European countries.

“Far from an attempt at interfering in the parliamentary debate in France or prejudging the outcome, Larousse’s editions are written to fit into their strict encyclopaedic mission”.