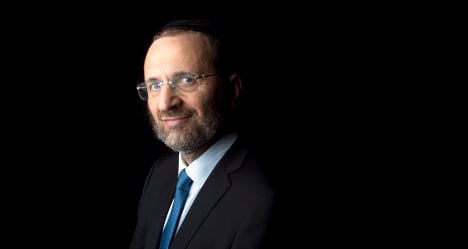 Who is Gilles Bernheim?

Gilles Bernheim is a 60-year-old philosopher and rabbi, who was the Grand Rabbi of France until he resigned on Thursday afternoon.

On Thursday, the Central Consistory – France's highest Jewish religious authority  – met to decide his fate, after he finally admitted responsibility for plagiarizing passages for three major pieces of writing, on Tuesday.

The central consistory has the power to strip a grand rabbi of his duties, but had never before taken such a step. In the end, they didn't need to, after Bernheim fell on his sword and handed in his resignation.  "He recognised his faults, apologised and gave explanations," Sammy Ghoslan, vice president of the consistory, told AFP after the meeting.

His resignation as Grand Rabbi is "a solution that brings more serenity. We all agreed", he said, adding Bernheim's post would be taken up by an interim person who will be chosen soon by the consistory's president.

Well, the subject matter of the scandal is Bernheim’s highly-academic, not particularly accessible philosophical writings. But what’s had him on the front pages in France lately is the way he has handled the allegations against him.

The scandal broke at the beginning of March when the ‘Strass de la philosophie’ blog found that parts of his book ‘Forty Jewish Meditations’ had plagiarized an interview with the French thinker Jean-François Lyotard.

At first Bernheim denied it, and even went as far as implying Lyotard, who died in 1998, pilfered his thoughts. But on April 3rd he admitted there had been plagiarism, but blamed it on the ghost-writer for his book, who was a student researcher. “I was fooled, and for that I’m responsible,” he said.

Once Bernheim’s reputation had been questioned, the plagiarism investigators evidently went to work.

In early April, a blog called “The Archaeology of ‘copy and paste’” revealed that part of an essay by Bernheim opposing gay marriage, had been stolen almost word-for-word, from ‘The Ideology of Gender’, a work by Fr. Joseph-Marie Verlinde, a Catholic priest living in a French monastery.

This one hurt, since the essay had been popular in Catholic circles on its release in 2012, culminating in a long mention of Bernheim by Pope Benedict himself, in his address to the Roman Curia in December.

So even the Pope fell for it – does it get any worse?

Yes it does. Jean-Noel Darde, who runs the ‘Archaeology of copy and paste’ site, later found yet another instance of plagiarism by Bernheim.

This time the Grand Rabbi had taken words from Christian singer and musicologist Jean-Loup Charvet and used them without citation in his book “Concern for others at the foundation of Jewish law.”

It got worse on April 5th when doubt was cast on Bernheim's own qualifications. It was revealed that Bernheim had never been awarded an ‘agrégation’ in philosophy – the highest teaching qualification available in France – despite listing this among his achievements in several books and biographies.

The pressure appears to taken its toll and in an interview with Radio Shalom on Tuesday, he finally admitted responsibility for all three cases of plagiarism, as well as other smaller examples, and that he had allowed a writer for ‘Who’s Who’ to falsely claim he had been given an ‘agrégation.’

Despite mounting calls for him to step down as Grand Rabbi, Bernheim had been steadfast in refusing, and the case has upset and divided France’s Jewish community, which is the world’s third largest.

In the end it appears he had reached his limit, and resigned on Thursday.

Tell me more about Bernheim?

He was born in 1952 in Aix-les-Bains, near the French Alps, to a Jewish family with Eastern European roots. After becoming a rabbi, he got involved in the Central Consistory in Paris – the primary administrative organization for Jewish congregations in France.

Over the last few decades, Bernheim has been a voice on issues such as social justice, medical ethics, but especially relations with leaders from other religions, and he took part in published conversations with his friend Cardinal Philippe Barbarin in 2007.

In 2008 he was elected to a seven-year term as France’s Grand Rabbi, and in 2009, then President Nicolas Sarkozy made him a Chevalier (Knight) in the Légion d’honneur – the highest possible honour available from the French state.

With his once staunch supporters beginning to desert him day by day, however, it seemed inevitable that Thursday’s emergency meeting of the Consistory which he leads, would end with Bernheim's resignation or his sacking.

“There is greatness in acknowledging your errors, and I don’t hold any resentment against him. I don’t know anyone who’s perfect,” a rabbi and close friend of Bernheim told Le Parisien.

“What weight will his words carry now, before us and the whole world?” a member of the Jewish community in Alsace was quoted as saying in Le Parisien.

“To resign now would be an act of pride, when I need to show humility,” Bernheim told Radio Shalom on Tuesday before resigning two days later.