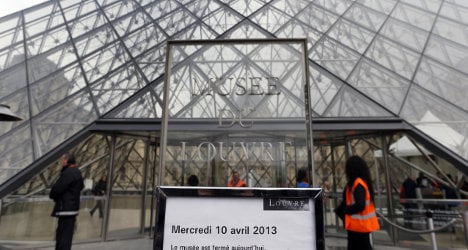 "The museum will reopen tomorrow," Christelle Guyader of the SUD union told AFP, saying the walkout had ended after management agreed to lay out a series of measures aimed at reinforcing police presence around the building.

The staff went on strike on Wednesday after becoming fed up dealing with the thieves, who were "becoming more numerous and more aggressive".

Museum staff claimed the pickpockets had targeted the employees as well as the million of visitors who visit the gallery each year.

Management at the museum said it had already lodged a complaint with prosecutors in December 2012 and demanded a greater police presence at one of the most visited museums in the world.

Sorting out the problem of the thieves will be one of the first jobs for Jean-Luc Martinez, who was announced as the new head of the museum last week.

According to the museum’s management “200 officers exercised their right to stop work on Wednesday.”

“The services of justice and the police have been mobilised,” said a spokesman, who said “business meetings” will take place to try to find a solution.

Hundreds of Louvre staff gathered outside the Ministry of Culture in Paris, which received a delegation from the museum at midday.

According to Christelle Guyader from the SUD union “are sometimes scared to work because they are confronted with organized gangs of pickpockets who are becoming more and more aggressive.