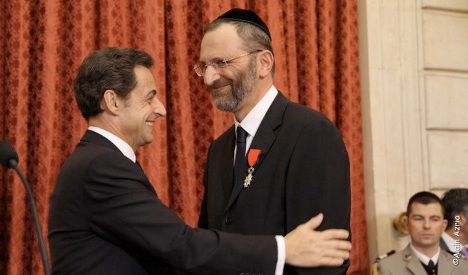 Further investigation by AFP revealed that a claim made on his CV that he was awarded a prestigious but extremely difficult-to-obtain philosophy academic status from Sorbonne University was not true.

Some 25 members of the Central Israeli Consistory of France will meet in Paris from midday to discuss the issue, according to Elie Korchia, vice-president of the body's Paris subsidiary.

The central consistory has the power to relieve a grand rabbi of his duties, but has never before implemented such a move.

After initially denying the accusation, Bernheim, 61, issued a statement on Wednesday from Jerusalem admitting the plagiarism, but blaming it on an unidentified "student" he said had assisted him with research and writing.

"That was a horrible error…. I was fooled. Nevertheless, I am responsible," he said.

Further investigation by AFP showed Bernheim noted on his CV a high academic status that he may not actually hold.

His Who's Who entry, based on information he provided, says he was awarded from Sorbonne University an "agregation de philosophie", a prestigious but extremely difficult to obtain achievement that permits the teaching of philosophy in French institutions.