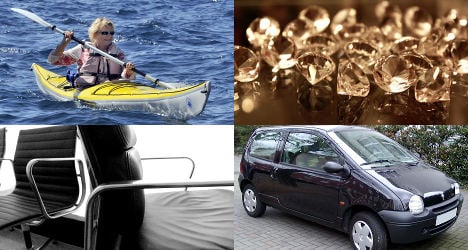 President François Hollande's efforts to "go all the way" to clean up French politics in response to the scandal over former Budget Minister Jérome Cahuzac’s secret Swiss bank account, are well underway.

He has demanded that ministers publicly declare all their assets by April 15th at the latest, and has encouraged all elected deputies to follow suit.

However the move aimed at "moralisation", which would bring French politicians into line with their counterparts across Europe, has been criticized and ridiculed as pointless 'voyeurism' in some quarters of the press and among politicians.

Some ministers have enthusiastically opened their books to the public through their own blog entries and Facebook posts, revealing everything from Renault Twingos to luxury furniture. One politician, although not a minister even revealed her "high value" carbon kayaks.

This however has lead to the declarations being mocked by elements in the French press, as well as by legions of Twitter users.

French Housing Minister Cécile Duflot became the butt of more than a few jokes this week when she revealed she is the proud owner of a 1999 Renault Twingo.

French writer David Foenkinos was one of many to take to Twitter to express their amusement (and bemusement) about Duflot’s ‘revelation.’

“A minister hides millions in Switzerland, and as a result we find out that Duflot owns a Twingo. Somebody explain to me the link,” he said.

Eva Joly, fomer presidential candidate for the Green party, also opened herself up to scorn when she reaffirmed the assets she publicized before last year’s election.

“My declaration of assets was completely transparent. I revealed everything, even including my kayaks. They’re expensive because they’re made of carbon,” she told BFMTV.

Arnaud Montebourg, French Minister of Industrial Renewal, revealed himself to be a bit of a design connoisseur on Tuesday, when he told French daily Le Monde he was the proud owner of a €4,500 armchair from American designer Charles Eames.

Health Minister Marisol Touraine appears to be the wealthiest cabinet-member so far to reveal her assets, which amount to a total of €1.4 million, according to Les Echos.

Centre-right UMP deputy from Nice, and former professional motorcyclist, Christian Estrosi, seems to have a taste for the antique, having declared €6,000-worth of jewelry and books, along with three apartments with a total value over €900,000.

Process criticised as a "smoke screen"

However politicians, especially those among the opposition UMP ranks, have been heavily critical of the efforts to increase transparency.

“If you’re dishonest, no regulation is going to set you straight,” Fillon told France 2 television.

UMP leader Jean-François Copé on Tuesday condemned what he called the "voyeurism and hypocrisy" of the project. "Hollande wants to put out a smoke-screen, to make everyone forget [about the Cahuzac affair]" he was quoted as saying in Le Point.

Transparency will only cloud the issue

The press have also joined in to ridicule the process.

Political journalist Caroline Roux this week predicted that the declarations would be worse than pointless, causing more public scepticism towards politicians, rather than less.

“The rich will have fingers pointed at them, and the less well-off will be suspected of hiding something,” she was quoted as saying by Europe 1 radio.

Hervé Gettegno, columnist at weekly magazine Le Point,  agreed, saying suspicions will only be raised because “we will be evaluating the total amount of the assets, but not their origins.”

Hollande's government has been under mounting pressure since Socialist former Budget Minister Jérome Cahuzac was charged with laundering the proceeds of tax evasion on April 4th, after admitting he had owned a foreign bank account.

Despite distancing themselves from Cahuzac, and despite his expulsion from the Socialist party, Hollande's government has been accused by figures on the right of having known about Cahuzac's illegal activities for months.

On Sunday, Swiss television TSR alleged the former minister had traveled to Geneva in 2009, in an unsuccessful attempt to transfer €15 million into one of his bank accounts.

This week's new effort on transparency has underlined the fact that France is trailing behind its European neighbours in this department.

"In the European Union, there are only two countries where asset declarations for elected officials are not public: Slovenia and France. This speaks volumes about the backwardness of our political customs," Daniel Lebegue, head of the French branch of anti-corruption group Transparency International, told AFP.

There could, however, be a broader cultural explanation for this failure to examine the accounts of elected representatives. French sociologist Janine Mossuz-Lavau told AFP that the French people "found it much more difficult to talk about money than about sex."