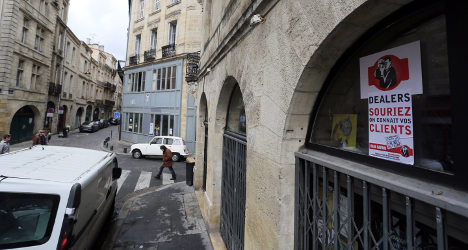 A sign on a street in Bordeaux, south-western France says "Dealers - smile, we known your customers." Photo: Nicolas Tucat

After more than a decade of uninterrupted drug-dealing outside their homes, the residents of one community in the south-western city of Bordeaux have had enough, and have turned to social media to put a stop to it.

‘Deal Safari’ is an account on Facebook, which was set up in February to unmask local drug-dealers and put their faces on display for all to see.

“We share on the web what we live every day, so that people understand we only want one thing – respect. We don’t inform on innocent people, but dealers, who are destroying our lives,” Jean-Christophe Cabut, a bar manager who is one of the leaders of the local community association for the Saint Paul district, told French daily Le Parisien.

"Nothing has changed here in more than 10 years. Neither the police, nor town hall have been able to stop the drug-dealing. Now, if we start sharing photos of dealers and their customers on the internet, that really could work.”

A post on the group’s Facebook profile suggests why residents are willing to try a new tactic to clean up the area.

“This area has become a squalid little block.  The pavement is a public toilet, our doorsteps have squatters on them…This street is the scene of fights, brawls and drug-deals. The residents have tried talking, have tried communicating with ‘them.’ Nothing works. Even the police haven’t managed to stop it.”

The group has also posted signs around the neighbourhood, stating "Dealers – smile, we know your customers."

So far, the photo-sharing community watch has only one entry. A blurry image shows a man standing on a pavement, as an unseen person’s hand appears to offer him something obscured by the picture quality.

Not everyone in favour

However there is nothing in the photo itself that couldn’t also be interpreted as a friendly conversation, or a request for a cigarette.

And therein lies the problem. The group's slogan "We're fed up, but we're not fascists", has not convinced everyone in the community that the image-sharing strategy is a good idea.

Olivia, a student who lives in the neighbourhood, is one of a significant group of locals opposed to the initiative.

“This is taking justice into our own hands. It’s not for us to settle this. The Town Hall and the public authorities have to intervene,” she told Le Parisien.

Xavier Deluc, a well-known French actor who lives locally, told the French daily, “I’m really not sure that encouraging people to inform on others is the solution.”

Cabut, the community leader, responded to such criticisms by somewhat confusingly telling regional daily Sud Ouest, that faces would be blurred on the Deal Safari profile.