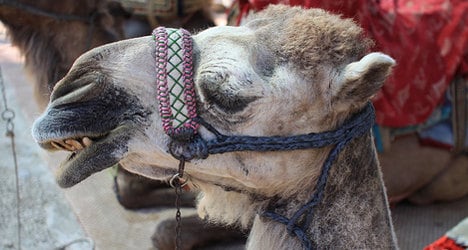 A camel given as a gift to the French President on a recent trip to Mali has reportedly been turned into stew, by the family asked to take care of it.

Reports in the French press this week revealed that the camel, which was given to François Hollande on his recent trip to celebrate the successful military intervention in Mali, has already been eaten.

When Hollande was presented with the animal on February 2nd he faced the difficult question of what to do with the gift.

He reportedly asked a local family to look after it and joked that he would “use it as a means of transport whenever I come back”.

However the problem of what to do with the camel appears to have been ruthlessly solved.

The animal would have made an interesting addition to his garden at the Elysée Palace and any number of zoos in France could have provided a home, but sadly the animal only made it as far as a casserole dish in a Mali village.

According to French Magazine Valeurs Actualites (Current Values), who quoted sources close to the French Minister of Defense Jean-Yves Le Drian, the camel ended up as a typical Saharan tajine stew.

There was better news for Hollande on Wednesday however when Reuters reported that officials in Mali, shocked at the demise of the first camel, had replaced it with a bigger and better version.