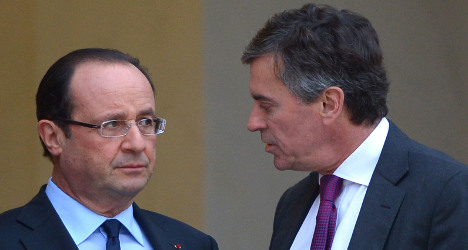 Hollande with the disgraced Cahuzac, whose secret Swiss bank account has plunged the government into scandal. Photo: AFP

French ministers will declare their assets publicly by April 15, the prime minister's office said on Monday, as the government seeks to limit the damage from an ex-minister's tax fraud scandal.

The government will also put forward a law by April 24 on financial transparency among ministers and other top officials, Prime Minister Jean-Marc Ayrault said in a statement.

The move comes as President Francois Hollande's government scrambles to contain a scandal surrounding former budget minister Jerome Cahuzac, who last
week was charged with tax fraud after admitting to having an undeclared foreign bank account.

PM Ayrault said measures to boost financial transparency would be presented to a cabinet meeting on Wednesday and that he would meet with the speakers and faction chiefs of the lower house National Assembly and upper house Senate the following day.

"The prime minister is preparing… a package of measures to ensure complete transparency on the assets of politicians and staff working with ministers, the president and the prime minister," Ayrault said.

He said measures would also be taken to "more severely punish breaches of the financial law and ethics and integrity rules, and to strengthen the fight against tax fraud and tax havens".

Last week the president vowed he would "go all the way" in a bid to clean up French politics.

He said France was a great nation that would "not accept being humiliated."

"To be clear… it is not the government that is being challenged, it is one man who failed."

Hollande came under further pressure on Thursday when his one-time campaign treasurer admitted he was a partner in firms registered in the Cayman Islands tax haven.

The president insisted he was not aware that Jean-Jacques Augier, had joint ownership of two firms registered in the tax haven.

"I know nothing about these activities, and if they do not conform to French tax law, I will ask the administration" to make the "necessary corrections," the embattled president said at a news conference in Rabat.

"It is for the tax administration to do its work" on these "private activities," he added.