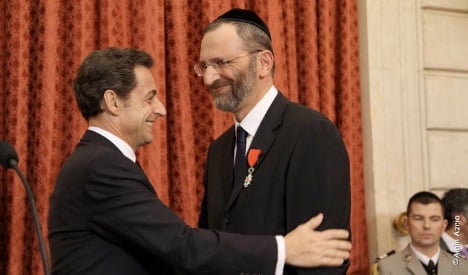 After initially denying the accusation, Bernheim, 61, issued a statement on Wednesday from Jerusalem admitting the plagiarism, but blaming it on an unidentified "student" he said had assisted him with research and writing.

"That was a horrible error…. I was fooled. Nevertheless, I am responsible," he said.

Further investigation by AFP showed Bernheim noted on his CV a high academic status that he may not actually hold.

His Who's Who entry, based on information he provided, says he was awarded from Sorbonne University an "agregation de philosophie", a prestigious but extremely difficult to obtain achievement that permits the teaching of philosophy in French institutions.

However university "agregation" lists from 1972 to 2000 have no entry for Bernheim.

The head of the association managing the lists, Blanche Lochmann, said the Grand Rabbi's name was not in the agregation lists kept by the French education ministry either.

"It is very difficult for a public figure to try to fool people as to whether he has an agregation," she said.

"This is the first instance that is so blatant."

Bernheim's spokesman, Rabbi Moche Lewin, told AFP that the Grand Rabbi was not available to respond to the latest developments in the scandal.

"The Grand Rabbi is very shaken by these attacks and does not wish to comment. But he will make a statement next week," Lewin said.

Bernheim was elected France's Grand Rabbi in 2008 for a seven-year term.

His intellectual standing in the religious arena was enhanced last December, when pope Benedict XVI quoted from one of Bernheim's essays as part of his argument against gay marriages.