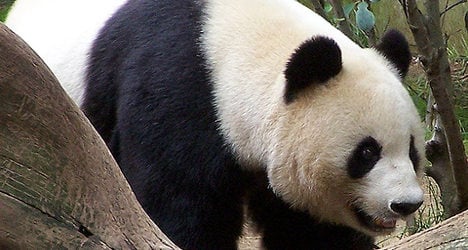 Yuan Zi and Huan Huan – "Chubby" and "Happy" in Chinese – arrived at Beauval zoo in central France in January last year, on loan from China for 10 years at a cost of around a million dollars a year.

The zoo announced on Friday it would build a facility that would process the dung of the two pandas and of other animals, as well as plant matter, to
produce biogas that will then be turned into heat and electricity.

Some of the energy produced will be used to keep gorillas and manatees – also known as sea cows – warm in their pens, and to heat the building that houses elephants in the winter, allowing a 40 percent saving on the gas bill.

The rest will be transformed into electricity and sold to French power giant EDF.

"This initiative is a perfect fit in the policy of sustainable development that we have been applying for a long time," said Delphine Delord, spokeswoman for the zoo.

Pandas are an endangered species and only about 1,600 remain in the wild in China.

Some 300 others are in captivity worldwide — mostly in China, but also in 15 foreign zoos where they are sent as part of Beijing's efforts to use soft power to boost its image, the so-called "panda diplomacy."

They eat 35 kilos (78 pounds) of bamboo a day and defecate about 30 kilos a day, making them prime candidates for this green initiative.

Beauval zoo has a total of 4,600 animals and attracted some one million visitors last year.