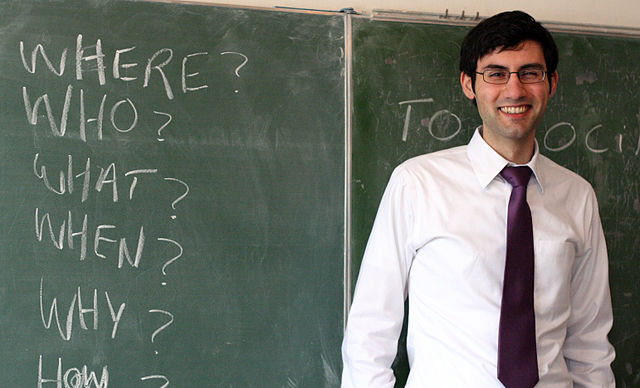 Photo: G0h4r/ Wikimedia
English teaching is a huge industry in France, with thousands of foreign nationals plying their trade in language schools across the country.
For some it is the dream job and a free ticket to travel and meet people, but for others it can be an unforgiving world that leaves them living on the bread line.
Here are the top tips for finding work as a prof d'anglais.
1. TEFL isn't the be-all and end-all
“To TEFL or not to TEFL”, This is the question facing everyone who wants to teach English abroad. A TEFL (Teaching English as a Foreign Language) qualification will undoubtedly open more doors, especially in France.
However, it’s certainly not the be-all and end-all of becoming an English teacher. “I would much rather take on a teacher with experience, someone who says they have been working for seven years, maybe three of those in France. I don’t really care if they have a TEFL,” David Henson, head of Interface Business Languages in Paris tells the Local.
Former teacher in Paris Jasmine Garside says: “A TEFL certificate is always advisable (although to be honest no one checks if you have one, even though it's stated everywhere), and experience is also usually requested.
“But anyone with basic social skills, a creative approach to the English language, and a few grammar facts up their sleeve, will get through the interview stage, no problem.” Photo: nito103/ Deposit photos
2. Choose the right school
There are plenty of academies or private language schools out there, with over 300 in Paris alone, but the reality is some are much better than others, and some are worth avoiding completely.
We could not possibly name and shame academies on these pages, but there are plenty of English teaching blogs out there that do.
Often it’s just a case of trial and error. “If you're serious about wanting to get into teaching, then you will find the right place eventually, although you'll probably go through a few bad ones first,” says Englishman Hensen.
Garside, originally from Scotland, adds: “Look out for corporate crooks. Chains of language schools are usually an easy option for getting a quick teaching position, but will not necessarily be the most intellectually stimulating, and will often work out as the worst option financially.”
3. Go off the beaten path
It’s easier to concentrate your job searches around the established academies, as they often have the biggest staff numbers and turnover of teachers. However it might pay off to spend some time looking elsewhere.
“Private language schools – primary and secondary, rather than adult language centres – offer some very well-paid positions and are definitely worth checking out if you can already prove your credentials in teaching and are willing to follow a script,” says Garside.
France's universities are another potential source of employment and are inclined to pay better than your average language school. So too are town halls, many of which offer their own English language courses.
4. Know your salary
“In terms of pay, €1,200 after tax per month is the absolute minimum wage you should envisage in Paris, although slightly less could be feasible elsewhere in France,” says Garside.
“Make sure the job you get allows you this salary, or the time to do other things, otherwise you'll be drinking €1 bottles of wine, eating dry baguettes and sleeping on the Place de la Bastille.”
You might be offered what you think is a decent hourly rate for teaching English, but in reality what you end up with at the end of the month might only leave you with small change to buy a ‘jambon beurre’ after you have paid your rent.
“You are often quoted a wage that gives you no idea of the salary you will earn in reality. Determine whether it's a fixed salary or an optimistic monthly average when negotiating,” Garside says. Photo: londondeposit/ Deposit photos
5. Consider if you want to be an entrepreneur or not
Some academies may ask you if you have “auto-entrepreneur status” in France, or they might ask you to get it.
It basically means you are self-employed rather than on a contract at the language school. It's cheaper for them and it also means you can demand a much better hourly rate.
The catch: you have to sort out paying your own social charges, which are paid depending on how much you earn. “If it's only a short stay, it's not worth it because the administrative saga can be painful and long,” Garside says.
“However, if you do have an established client base, this is the best means of earning money.”
READ ALSO: Ten tips on French business etiquette
6. Check your holiday pay
“Remember that the French take, on average, 5-10 weeks holiday each year and you may not be paid during the time your students are on holiday, depending on your contract,” says Garside.
So when all your students are in the Riviera, you might be stuck in Paris with no money and nothing to do. Make sure you check your rights to holiday pay and a minimum number of hours when negotiating a contract.
7. Find out if you're paid for preparation time
When negotiating your salary, if you are in a position to, make sure you know whether you'll be paid for preparation time.
If you are a creative teacher and each lesson has to be a killer one, then your preparation time could be longer than the lesson itself. Some schools or academies will get around this by giving you a set script to follow.
This has its obvious advantages but can be painfully boring at the same time.
READ ALSO: Ten tips for finding work in France
8. Account for travel
A love of travel is why most English teachers end up doing what they do, but travel can also cause many to give it up.
Paris and the surrounding Île-de-France region is a huge area, and academies will soon have you travelling to teach at companies far and wide, and your time spent on a [regional] RER train will normally not be paid.
“Make sure you find out during the interview how much travel will be required and how it is remunerated. If you teach for three hours but have to travel for five, your day works out much longer, and your hourly rate takes a big blow,” says Garside. Photo: AFP
9. Get your CV out there
Sending a CV is still the best way of getting a job at a language school. The best time to send them off is June and July, before the new term starts. This is when a lot of teachers move on and schools are desperately hunting for new recruits.
Getting your CV just right is tricky, and even if you're writing it in English, French companies or schools might expect you to follow the French rules of CV writing.
10. Consider private classes
Teaching private classes is always a good way to top up your income. Just make sure you're not travelling for an hour to get there, and make sure you have a cancellation policy that means you get paid even if your client calls off a lesson at the last minute.
To search for English-language jobs in France consult The Local's job pages.
Another version of this story appeared in 2013.