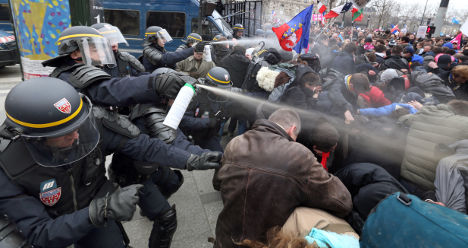 Almost two months after being passed in France’s lower house, the National Assembly, François Hollande’s flagship gay marriage bill is set to go before the Senate on Thursday, with a formal debate scheduled to start at 4pm.

A slim Senate majority for the Socialist government, however, means the legislation which also permits adoption for same-sex couples, could face a fraught passage.  And outside France's upper house increasingly angry opponents of the bill have planned more protests.

Two separate demonstrations have been scheduled for Thursday evening to coincide with the start of the debate, amid increasing frustration and anger within the anti-gay marriage movement that their voices are not being heard.

The ‘Manif pour tous’ (Demo for all) movement will assemble outside the Senate at 6pm, and has encouraged its supporters to bring flags, whistles and drums to the event.

The coalition, led by comedian Frigide Barjot, held an historic rally against gay marriage in Paris in January, and a similar march on March 24th led to angry scenes and riot police spraying tear gas on a small number of demonstrators.

Hardline Catholic group Civitas has also called on its members to hold a prayer vigil outside the Palais du Luxembourg at 7pm.

A rapidly-growing Muslim contingent has also been joining the ranks of gay marriage opponents, in recent times.

Analyzing the reasons behind the growing the number of Muslims supporting the anti-gay marriage campaign, François Jay, a co-organiser of the "Manif pour Tous" said: "At the beginning Muslims told themselves that gay-marriage was like alcohol: it will be permitted but because they don't consume it, then it won't affect them.

"But the more they learned about the law, and given the fact they are sensitive to the questions of children being raised by a mother and a father, they have become increasingly outraged by the legislation," Jay told Le Parisien.

The Socialist government’s majority in the Senate stands at just six, and some defections are expected in the final vote on the gay marriage bill, which could make for a tight head-count on April 12th or 13th, when senators are expected to cast their votes.

These defections, however, could be compensated for by ‘Yes’ votes among the ranks of the centre-right opposition UMP party, with French magazine Le Point forecasting five UMP defections, and two abstentions.

A total of 280 amendments to the bill are scheduled, and the UMP could yet propose a motion to adjourn the debate and hold a referendum on the legislation.

The Senate debate comes as a survey published by BFMTV on Thursday found 53% of the French people are in favour of legalizing gay marriage, but 56% are opposed to same-sex adoption.

On February 12th, after ten days of occasionally fraught debate, and some very late nights, deputies in France’s Assemblée Nationale adopted the bill by 329 votes to 229, comfortably surpassing the 280 required majority.

France would become the world’s 12th country to legalize same-sex marriage if the bill is passed by the Senate.