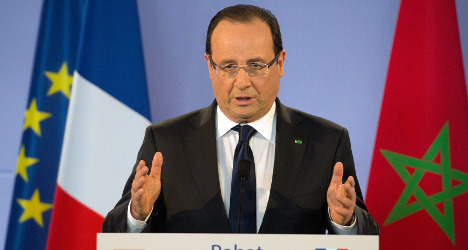 He said France was a great nation that would "not accept being humiliated."

"To be clear… it is not the government that is being challenged, it is one man who failed."

Hollande came under further pressure on Thursday when his one-time campaign treasurer admitted he was a partner in firms registered in the Cayman Islands tax haven.

The president insisted he was not aware that Jean-Jacques Augier, had joint ownership of two firms registered in the tax haven.

"I know nothing about these activities, and if they do not conform to French tax law, I will ask the administration" to make the "necessary corrections," the embattled president said at a news conference in Rabat.

"It is for the tax administration to do its work" on these "private activities," he added.

Critics have accused Hollande and his government of either trying to cover up the Cahuzac scandal or of mismanagement for having believed his ex-minister's denials.

The head of the main opposition right-wing UMP party, Jean-Francois Cope, said the government no longer had the credibility to rule.

"The only solution possible, the only one, is a major government reshuffle, including the prime minister," Cope said.

Opposition lawmakers have called for a parliamentary probe into the scandal and an opinion poll showed nearly two-thirds of respondents saying the government had handled the situation badly.

Hollande had promised a government of unimpeachable morals after his predecessor Nicolas Sarkozy was embroiled in a series of corruption and influence peddling investigations.

The tax scandal is further damaging the standing of Hollande, who is languishing in opinion polls less than a year into his five-year term.