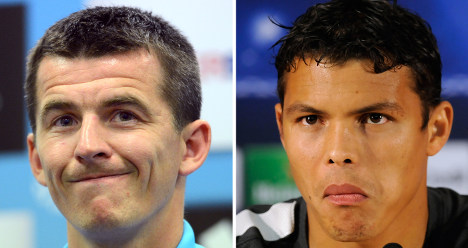 Barton, who is currently on loan at Ligue 1 club Marseille from Queen's Park Rangers, took to Twitter to describe Silva as a "pussy" and "a overweight ladyboy," during the Paris club's Champions League quarter-final first leg against Barcelona.

Thiago Silva. That the same pussy thatsbeen injured all season. Another over rated Brazilian. Sort your hamstrings out FatBoy…

Have to take back what I said about Thiago Silva being over rated today. Been immense tonight. Still looks like a overweight ladyboy though!

"These attacks are serious and go beyond mere verbal jousting," PSG added, saying both the club and Silva would consider what action to take in response.

Marseille responded by saying they had called on their player to desist and "put an end to the controversy."

Furthermore: "Olympique Marseille and Joey Barton offer their apologies to Thiago Silva and to his club for the misplaced comments made by (our) English player on social media over the past 36 hours," the club said.

The insults came after Silva initially criticised Barton in an interview with L'Equipe published on Tuesday.

In a statement, Paris Foot Gay, an amateur club with a large number of gay players who campaign against homophobia in football and society as a whole, said that Barton "undoubtedly based his remarks on stereotypes linking Brazil to transsexualism."

"Paris Foot Gay considers that such vulgar, discriminatory and unfunny remarks are unacceptable coming from people in the public eye," the statement continued.

"Being a football idol is not an excuse but should instead make players more responsible for the impact their comments can have on the public, especially young people."

Prior to the club issuing a statement, Marseille coach Elie Baup had earlier Wednesday refused to take Barton to task for his comments, saying: "Barton is the only one responsible for his acts and his communication.

"Everyone is free to say what they want but, for me, we represent the club and owe it to ourselves to behave in an exemplary manner."

Paris Foot Gay added that the LFP, who run the French top flight, will take disciplinary action against Barton for his comments.

Barton has a chequered past, including a spell in prison for assault and a sending-off on the final day of the last Premier League season for elbowing Carlos Tevez and kicking Sergio Aguero in QPR's 3-2 defeat to Manchester City.

That incident saw him handed a 12-match ban, but since arriving in France his on-field behaviour has been largely unremarkable, save for a red card in Marseille's 1-0 defeat to Nancy in February.