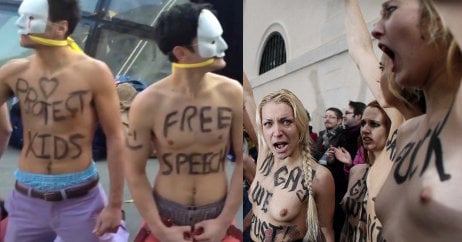 First came the militant topless feminists Femen, who are known for their outlandish, semi-naked demonstrations at Notre Dame cathedral and the famous Louvre art gallery. Now Paris is home to a rival group of bare-chested male activisits that go by the name of Hommen.

The group has emerged in the last few days in France as a new, more radical arm of France's powerful anti-gay marriage movement.

Mirroring the tactics of Femen, the masked men paint slogans on their bare chests and take to the streets to spread their message.

However that appears to be where the similarities end.

In a rare interview with The Local on Wednesday, a representative of Hommen, calling himself ‘Henri’ was scathing about Femen saying the women were "practically a terrorist group".

“They hold shocking events, and they act outside the law," he said. "They use violence and hatred – we do not. We are peaceful and determined."

THE TEN MOST PROVOCATIVE STATEMENTS ON GAY MARRIAGE

“The silent majority is emerging from its silence – this is a revolution.”

Hommen staged its biggest protest so far outside Paris’ busy Saint-Lazare train station on Tuesday evening. A group of shirtless, masked men waved the tricolour and chanted outside the major rail hub in the French capital, to both applause and booing from passersby.

Their torsos painted with messages such as “Freedom”, “Protect Kids”, and “Free Speech”, some chanted “Democracy!” while others were symbolically gagged by a suited man bearing a François Hollande mask.

“At our first event, there were 20 of us. On Tuesday at Saint-Lazare, there were 30,” said Henri. “Our goal is to oppose gay marriage. The French people have expressed themselves with historic demonstrations against it, and the government’s only response has been violence,” he said, referring to the use of tear gas at protestors during a rally in the capital last month.

France’s anti-gay marriage movement has become increasingly frustrated at the French president’s refusal to hold a referendum on the question of same-sex marriage and adoption.

The French president has preferred, instead, to act through parliament, where the lower house (Assemblée Nationale) passed the gay marriage bill in February.

“The government has gagged us, and tried to prevent us from speaking, but there is a silent majority in France who oppose gay marriage. And now that majority is emerging from its silence,” said Henri.

“This is a revolution,” he added.

‘Anger is rising all over France.’

On March 26th, Socialist deputy Erwann Binet had to be evacuated under police protection from a public debate at a university in the Paris suburb of Yvelines.

A group of around 20 anti-gay marriage protestors forcibly stormed the lecture hall and put an end to the discussion, holding a banner and chanting for 30 minutes.

“This movement gets more and more radical every day,” said Henri, adding “Anger is rising all over France.”

For Henri, though, there is nothing extreme about Hommen’s tactics or beliefs.

“The fact is that we represent the majority of French people, who strongly oppose gay marriage. We don’t have names, and we don’t show our faces, because we are all the same person," he said.