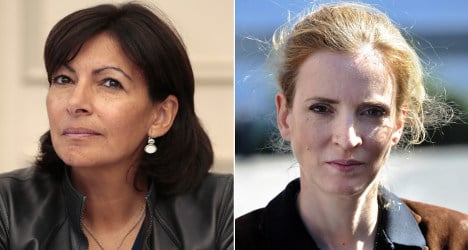 Nathalie Kosciusko-Morizet, UMP mayor of Paris suburb Longjumeau, and Anne Hidalgo, Socialist first deputy mayor of Paris, are at the head of a so-far all female list of candidates vying to become the next mayor of the French capital.

But with a year to go before voters head to the polls, the battle is already raging as it took an unexpected early twist this week.

Hidalgo declared on Monday she intended to sue Kosciusko-Morizet, or NKM as she is known in France, for defamation meaning the pair look set to slug it out in court long before any ballot takes place.

It comes after French media reported that NKM made claims to a room full of journalists on Sunday that Hidalgo had been convicted in 2012 in relation to ‘undeclared overtime’ violations at APUR, an urban development agency, where Hidalgo was president in 2010.

The claim has caused partisans on both sides of the divide to spring into action.

“There are some things you just don’t do,” Hidalgo’s lawyer Patrick Klugman told French daily Le Parisien on Tuesday.

“Anne Hidalgo cannot allow her morality to be so lightly called into question. She was never once bothered by police, nor called before a court during that case,” he added.

And in another counter-attack from Hidalgo’s corner, Jean-Louis Missika dismissed NKM as a “Sarkozy baby,” adding, “This is all just a marketing ploy.”

“She thinks she has to destroy the image of her opponent in order to take her out. But we won’t be doing likewise,” Missika was quoted as saying by Le Parisien.

NKM’s lawyer Jean-Yves Dupeaux confirmed she was standing by her allegation, and described her ‘astonishment’ at hearing about the defamation lawsuit.

“We’ve had quite enough of Madame Hidalgo’s constant moral lessons,” the UMP deputy was quoted as saying by Le Parisien.

“Either Anne Hidalgo was just a figurehead [at APUR] or she wasn’t, in which case she has to accept responsibility,” he added.

Current mayor Bertrand Delanoë will step down at the end of his second term in office next year and so far all the big names lined up to replace him are women.

It looks almost certain, therefore, that in 2014, Paris Town Hall will become home to its first ever female mayor.

Delanoë’s deputy, Hidalgo, 53, looks set to be the official Socialist Party candidate, and is the overall front-runner so far, not least because Delanoë himself has given her his backing.

NKM, 39, a spokeswoman for Nicolas Sarkozy during last year’s failed presidential re-election bid, may yet have to win a primary against Rachida Dati, the high-profile former justice minister under Sarkozy, in order to face Hidalgo for next year’s historic prize.