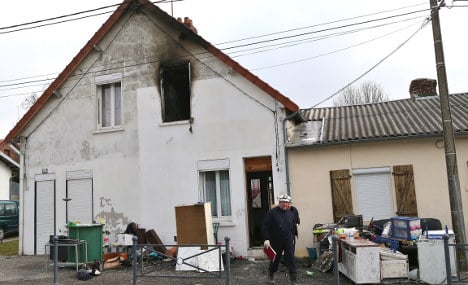 The father, who is reported to be in his forties, leapt from a first-floor window of the house in Saint-Quentin, a town about 130 kilometres (80 miles) northeast of Paris, in order to seek help.

He later attempted to go back into the house with a neighbour but the two were helpless in the face of the massive flames.

"He never thought of himself. He tried to go get help. He burned himself trying to save his son," said the neighbour Olivier Hubeaux.

Around 50 firefighters were dispatched to the fire, but struggled to get in the building due to the "violence" of the flames and the "nearly complete collapse of the first floor", said firefighter Lieutenant Thierry Oberlin.

Masses of smoke also "seriously complicated the work of the firefighters" who found the five bodies of the children, "dead from asphyxiation", said town official Jean-Jacques Boyer.

Autopsies will be carried out on the children on Monday.

Investigators were on Sunday following the assumption that the fire was accidental, but its exact origin had not yet been confirmed.

The father, whose name was not released, was in hospital with serious burns and was only told on Sunday morning by a psychologist that his children had died.

The children's mother arrived on Sunday and was in the care of doctors after receiving the news.