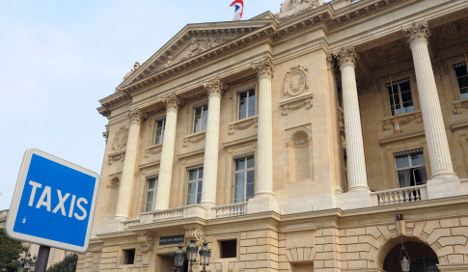 The entrance to the Crillon hotel in Paris. Photo: Eric Piermont/AFP

As the venerable Paris institution located on the foot of the Champs Elysees prepared to close, veteran guests and celebrity habitues bade good-bye to the staff in a wistful and sombre atmosphere.

"We are exceedingly sad. We have been coming here for 32 years. This place is magic. It's real class here, no bling bling," said Bernie Schumacher, a 66-year-old Belgian.

"Thank you for all these smiles during all these years," she said, bidding goodbye to the concierge Serge.

French actor Christophe Lambert, who lived in the hotel for three years, said the Crillon was "unlike any other hotel".

"The staff are very close to you," said Lambert, the star of the "Highlander" series, who also played Tarzan in a remake of the Lord Greystoke story.

"Today I use it as my office," the US-born star told AFP, vowing to return when the hotel reopens in the spring of 2015.

The staff took pains to explain that while innovations such as a basement spa were planned, the hotel's classic look would not be tampered with.

"We will not touch the historic salons on the first floor but we will redo all the 147 rooms, the ground floor and the two inner courtyards," said Sandrine Daban from the Crillon's public relations department.

It features scallops served with black truffles and the dacquoise, a dessert cake from southern France made with layers of almond and hazelnut meringue and topped with chocolate mousse.