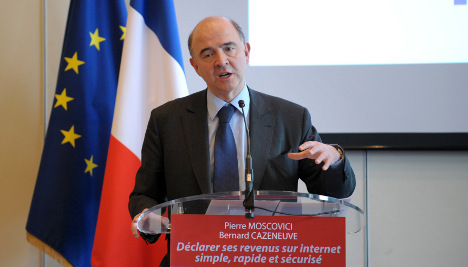 The INSEE national statistics institute said that the country's public deficit came in at 4.8 percent of gross domestic product last year, above the 4.5 percent target agreed with the EU.

"We are on the right track, we are in the process of reducing deficits," said Finance Minister Pierre Moscovici after the figure was announced.

Moscovici said that nominal figures, which were influenced by a slowdown in France's growth rate, masked a better improvement in the so-called structural deficit.

"We have made this effort … which the European Commission expected of a reduction of the structural deficit of 1.2 percent … that is what we have done," said the minister.

The EU's targeting of nominal deficits has been widely criticised as pressuring countries to cut spending too fast, causing economies to contract and making it more difficult if not impossible to meet deficit targets.

The Organization for Economic Development and Cooperation (OECD) said Thursday that given the flat growth or recession in many European countries that nominal deficit targets wouldn't be met.

France — the eurozone's second-largest economy after Germany — was supposed to push its public deficit back down to EU ceiling of 3.0 percent of GDP this year.

The government already said last month it would miss that target, forecasting a deficit of 3.7 percent.

The European Commission has in return insisted that France push the deficit considerably below 3.0 percent in 2014.

However analysts doubt that France will be able to meet even that target.

"In 2013 we will be very far from 3 percent and it will be very difficult to achieve it even in 2014 except by pursuing severe austerity which would push off further the recovery" of growth, said Mathieu Plane, an economist at the French Economic Observatory at the Sciences Po university.

Data released earlier this week showed that the French economy was stagnant for 2012 as a whole.

Critically in an economy driven by consumer demand, household purchasing power declined for the first time since 1984. Consumer purchasing power slid by 0.8 percent due to increases in taxes and social charges.

INSEE forecasts that the French economy will remain virtually flat in the first half of this year before beginning to perk up.

Both the European Commission and OECD forecast that the French economy will manage only 0.1 percent growth this year.

Plane said that the government will from here on out find it difficult to cut spending further without damaging growth prospects.

"At the beginning they cut wasteful spending, but the further you want to go the further the more you have to cut back on social spending and public investment which have a stronger impact on growth," said Plane.

While many economists urge the government to refrain from cuts that will damage growth, others such as Jean-Paul Betbeze are calling for pared back public salaries and pensions.

Betbeze said the France has failed to control spending by local governments, which has risen as the central government has trimmed back.

The situation poses a conundrum for President Francois Hollande, who promised again in an interview Thursday that near-record unemployment of over 10 percent would begin to come down by the end of year.

He also vowed that military spending would not be cut as French forces are engaged in Mali, even though the government has announced an additional €5 billion in cuts at ministries next year, on top of 10 billion already sought.

Hollande did announce that pension contributions would likely go up, social benefits trimmed for well-off families, and a number of higher taxes on the rich.