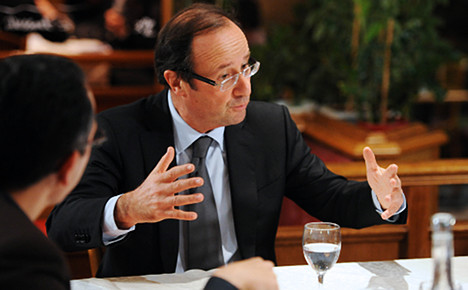 The embattled Socialist leader, whose ratings have dived to as low as 22 percent in his 10 months in power, appeared on primetime French television to rally public support in a carefully staged interview.

"I have been president for 10 months, not 10 years," Hollande said, blaming in part the European debt crisis for France's woes and appealing for all French citizens to join him in his "battle" to nurse the economy back to health.

Unemployment is almost touching the record level of 3.195 million reached in January 1997 and is over 10 percent, the spending power of French households fell in late 2012 for the first time since 1984, and there have been thousands of layoffs.

"My priority is employment and my course is growth" Hollande said, adding that "when one is at zero growth, one does not create any jobs."

"I will not wait for growth, I will create it," he said.

Hollande however admitted that unemployment would continue to rise before the curve is inversed at the end of this year.

The president has also isolated the business lobby and the seriously rich by proposing a 75 percent tax on incomes above one million euros but this has been scuppered by the country's Constitutional Court.

The proposal has led to a flight of capital with many well-heeled French citizens leaving the country, including top actor Gerard Depardieu and optician chain tycoon Alain Afflelou.

Hollande returned to the theme on Thursday saying companies would have to pay 75 percent tax on salaries exceeding one million euros ($1.28 million).

The president has already publicly renounced his government's goal of cutting the public deficit to the EU limit of three percent of output this year, saying that it would probably amount to 3.7 percent.

Hollande on Thursday said growth this year would be short of the 0.8 percent target given earlier but did not provide a new figure. The European Commission has forecast 0.1 percent growth for France this year.

"We had not anticipated that the crisis would last as long as it did," Hollande said.

Hollande's government has already announced 5 billion euros in cuts at vgovernment ministries next year, on top of 10 billion already sought. But the president, whose armed forces are in the limelight for intervening in Mali to chase out Islamist rebels holding the vast desert north of the country, and threatening the capital Bamako, said the defence budget would be untouched.

"We have nuclear weapons," he said. "That's our protection, we must retain them and even modernise them."

Hollande also ruled out any additional taxes this year and the next and sought to inject confidence in his leadership, saying: "I know what I want to do…and I know where we are going, it's towards success."

Hollande has come under attack from even some members of his Socialist Party for waffling. A lawmaker Pascal Cherki said: "When one is president of a country … one takes stock of the situation and changes tack."

The beleaguered leader touched on one of the successes of his government — the French intervention in Mali, which won him international kudos for halting the advance of Al-Qaeda-linked Islamists to the country's south.

He said the number of French troops would be whittled from the current level of more than 4,000 to 1,000 by the end of the year.

France — which is leading a military intervention to secure northern Mali from Al-Qaeda-linked rebels — is eager to withdraw and hand over to an African force known as AFISMA that would be transformed into a UN peacekeeping mission.

Hollande also said there was evidence that a French family of seven kidnapped last month in Cameroon to avenge the French intervention in Mali were alive, but did not elaborate.