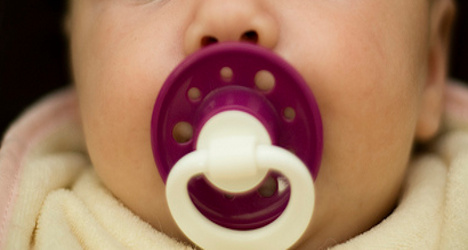 In spite of morbid economic news and continually rising unemployment, the French more than any other western country, apart from Ireland, have kept calm and carried on bringing little bundles of joy into the world, according to a report published on Thursday.

In total 792,000 babies were born in France in the last year, according to a study by INED, the Institut national d’études démographiques (National Institute of Demographic Studies).

This keeps the key figure of ‘babies per woman’ at exactly two in France, despite a miniscule dip in the actual total of births, from 793,000 in 2011.

Apart from the Irish, the French are now the most reproductively active nation in Europe, where as a whole there has been a general slump in new births since the beginning of the economic crisis in 2008, the report states.

The crisis-savaged Portuguese, for example, finished bottom of the table for 2011, with just 1.35 new births per woman.

According to the report's authors, France’s steady rate of visits from the stork, is due to the country’s social welfare system.

“In France, social and family policies have absorbed the shock of the economic crisis,” which has caused a decrease in birth rates elsewhere in Europe, the INSED report was quoted in right-leaning daily Le Figaro.

France is predicted to fail to meet its EU public deficit targets this year, which has led to renewed calls for massive spending cuts.

Earlier in March, the Socialist government of President François Hollande was advised to slash child benefit payments in half for certain families.

France’s stable fertility rate throughout the crisis is in stark contrast to trends on the other side of the Atlantic, according to report's main author, Gilles Pison.

“In the United States, the fertility index was at 2.12 babies per woman in 2007, before the onset of the crisis,” Pison told Le Figaro.

The INSED report also found that on average, French women were giving birth later on in life, with the average age of new mothers rising to 30.1 years.