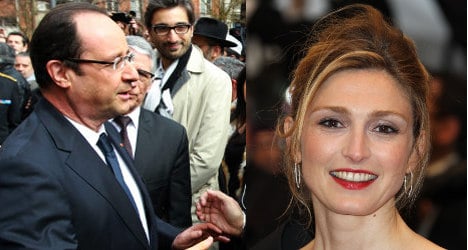 Judicial sources said Gayet, a blonde 40-year-old who appeared in one of Hollande's 2012 election commercials, had filed a complaint relating to an alleged breach of her right to a private life with Paris prosecutors on March 18.

The move came after she was reported or implied by various bloggers and websites to have become close to the Socialist president.

Hollande, 58, lives with his girlfriend Valerie Trierweiler, a glamorous journalist for whom he left fellow Socialist politician Segolene Royal, the mother of his four children.

In a statement, Gayet's lawyer said there was no basis to the rumours.

"The actress Julie Gayet has instructed my chambers to take legal action over the rumour, widely disseminated on the Internet, suggesting, with no foundation, that she has a romantic relationship with the president of the republic," the statement said.

"She expects her right to a private family life to be respected as there is nothing to justify these claims."

Gayet is an established television and cinema character actress who has appeared in more than 50 films. She is the mother of two children.

In the campaign video she filmed for Hollande, she described the then-candidate as "marvellous" but also "humble and a really good listener."

It was a performance that appears to have been sufficiently convincing to persuade some viewers her praise was based on more than admiration for Hollande's policies.