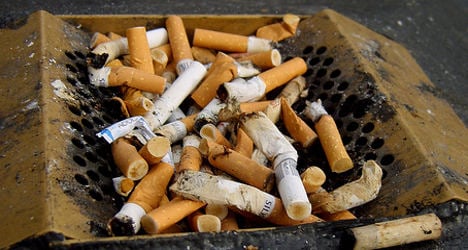 A socialist senator is leading the charge to bring France up to date with most of Europe when it comes to cracking down on passive smoking.

While France's Minister for the Family, Dominique Bertinotti, has said the government was considering a smoking ban for open spaces and parks where children were present, Senator Yannick Vaugrenard wants more.

In parliament this week he urged the country’s Health Minister, Marisol Touraine, to ban smoking in cars where children were present.

“The protection of a child does not stop at our own doors,” Vaugrenard said.

“Banning smoking in cars is necessary to protect the rights of the child,” the senator later told RTL radio. “It’s also necessary to teach the parents about the dangers to their own children. I myself was a heavy smoker. It was an aberration. We must act quickly.”

France is huffing and puffing behind much of the rest of Europe when it comes to smoking. Smoking in cars has already been banned in Cyprus, and in Ireland, similar legislation is expected by the summer.

Proposals for a ban have also been given serious consideration in the UK and Germany.

According to a British study published in the magazine Tobacco Control, a child’s daily exposure to pollutants increases by 30 percent if they spend just ten minutes in a car with a smoker.

Although not too keen on the senator's idea, family minister Dominique Bertinotti said the government was considering banning smoking in places where children were present, such as parks.

Le Parisien also revealed on Wednesday that a committee monitoring public policies has recommended a broader ban on smoking that would add stadiums, parks and closed terraces to a list of places where lighting up is prohibited.

Several local authorities in France, however, have decided not to wait for government legislation and have ploughed ahead with their own campaign against passive smoking.

Last year several beaches in the Riviera resorts of Cannes and Nice were declared smoke-free.

But an attempt last year by anti-smoking groups to ban smoking on the terraces of Paris’s cafés was rejected in court.

Gérard Audureau, from the pressure group Droits des Non Fumeurs (Rights of Non Smokers), told The Local a law banning smoking in cars could be problematic.

“In the UK, for example, they introduce a law and they apply it, but In France we introduce lots of laws but we never implement them, which seems to give us a certain pleasure,” he said.

“It’s obviously dangerous to smoke in cars when children are present but I think it’s more a question of education as it will be difficult to enforce from a legal point of view.

Audureau’s organisation has been fighting for the smoking ban to be extended to stadiums and café terraces, to tackle a rise in the number of people exposed to passive smoking.

“If you go out onto café terrace in Paris in the middle of winter, there is a huge cloud of smoke. It’s intolerable,” he added.