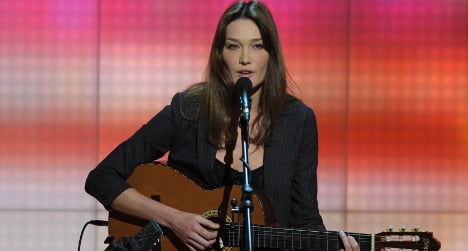 In an interviews with French media on Wednesday a tearful Bruni said Sarkozy was “serene and combative” after he was hit with charges that he took financial advantage of the world’s richest women Liliane Bettencourt in connection with an on-going  investigation into political funding.

“We will do everything to ensure the truth comes out,” said Bruni. “But I really cannot talk about it. It’s as upsetting to talk about it as much as it is to not talk. It is painful for the family.”

Asked by an interviewer on RTL radio if she wanted to "get her claws out" after the decision to charge her husband, Bruni replied "Yes, but I don't dare".

In a separate interview she told Le Figero that it “enraged" her not to be able to talk about the case. "My family and I are going through a very painful ordeal," she added.

Sarkozy was sensationally hit with the charges after being unexpectedly summoned last week to the Bordeaux offices of Jean-Michel Gentil, the judge in charge of the case, for face-to-face encounters with at least four former members of Bettencourt's staff.

Like the former president’s lawyer, Bruni dismissed the accusations being laid against her husband.

“Excuse me… What I can tell you is that it is unthinkable to imagine that such a man could abuse the weakness of a woman, the same age as his mother,” Bruni said.

The singer, who is about to release a new album titled “Little French Songs" spoke out days after Sarkozy himself broke his silence, taking to his Facebook page to slam the “unfair” and “unfounded” charges.

The former leader of the opposition UMP party thanked his supporters "from the bottom of my heart", and vowed to "dedicate all my energy to proving my integrity and honesty". He also denounced the accusations against him as "unfair and unfounded".

It is the first time the former French president has spoken publicly since being charged on Thursday night with taking advantage of L'Oréal heiress and multi-billionaire Liliane Bettencourt, in connection with an ongoing political funding scandal.

Sarkozy had a message for his "supporters and opponents alike", claiming that "at no time in my public life have I ever betrayed the duties of my position".

Weighing in on days of controversial allegations and counter-allegations between his supporters and opponents, Sarkozy also said he had not claimed any special treatment, and wanted only "the right to an unbiased, peaceful judicial procedure", adding that "I have faith in the legal institutions".