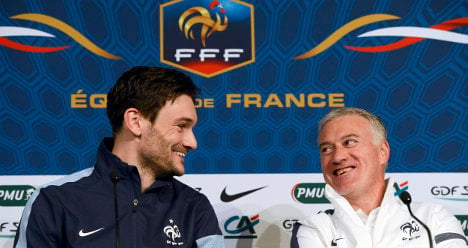 France served notice to Spain in the first qualifier, a 1-1 draw in Madrid in October, that they were not going to be an easy opponent and come into the rematch at the Stade de France on Tuesday with a two-point lead at the top of Group I.

Deschamps knows his side benefited from some breaks in that clash, notably Spain's early loss of David Silva to injury and a missed Cesc Fabregas penalty.

However, the outcome of that match and Finland's 1-1 draw with the Spanish on Friday have left France in an ideal position.

"We respected Spain before and continue to do so now," he said. "You need to respect teams, but there is no need to be scared or intimidated. We need to use the ball well and if we do that we can cause them problems.

"The game in Madrid could have ended very differently. "We could have been 2-0 down and gone on to lose. I don't know if we are a stronger team now than we were then, but we have three points more and two more than Spain. Nobody would have imagined that a couple of months ago.

"Now we will need to be at our absolute best against Spain and hope they don't play at their best, although I am sure they will be at their best."

Deschamps added that his team should not be preoccupied with dominating possession, but his comments suggest that packing the defence like Finland and others have done in order to stifle Spain is not the way he will go.

"We will not play for a draw. I prepare my teams to win, but if that is the way the game ends it will be a good result for us."

There is intense interest as to whether Karim Benzema will lead the home attack despite his questionable form at international level in recent times.

The Real Madrid striker has not scored for his country since netting in a friendly against Estonia prior to Euro 2012, but it seems that Deschamps will keep faith with him and leave Arsenal's Olivier Giroud, who scored against Georgia, on the bench.

"I am not going to say that Benzema will play, but I know his qualities very well, they cannot be disputed," added the France coach.

There could be two Madrid players in the France team if Deschamps also chooses to keep faith in Raphaël Varane, the 19-year-old centre-back who has been outstanding at club level in recent months and made his international debut on Friday against Georgia.

"He (Varane) still needs to be protected ahead of a game like this because he remains a young player," said France captain Hugo Lloris.

"But he proved his ability against Georgia and everyone wants to take part and contribute against Spain."

Varane and Arsenal's Laurent Koscielny could be paired together at the back with Paris Saint-Germain's Mamadou Sakho dropping out, while Patrice Evra is expected to return at left-back in place of Gael Clichy.

Deschamps looks set to ditch the 4-4-2 formation adopted against Georgia in favour of the greater protection afforded by a 4-3-3.

That would mean Newcastle United's Yohan Cabaye slotting into the midfield for a game that will be played before a sell-out 80,000 crowd.