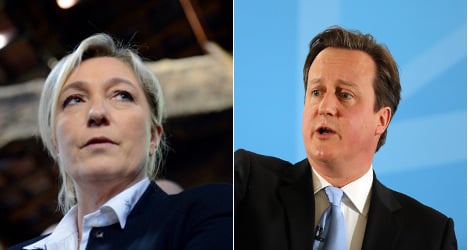 "The Front National hails the speech by the British prime minister which has smashed the taboo surrounding the unsustainable cost of immigration for European nations," FN vice-president Louis Aliot said in a statement.

"At a time of mounting unemployment and widening deficits, it has become urgent to start giving priority to our own nationals in jobs, housing, social benefits and health."

In a speech on Monday, Cameron unveiled plans which will restrict migrants' access to unemployment benefits and introduce a two-year residence qualification for social housing.

The prime minister also promised a crackdown on so-called "health tourism", suggesting immigrants from outside the European Union would have to prove they were legally resident in Britain to receive free treatment.

Cameron's speech has come under fire for over-playing the idea that Britain has become a "soft touch."

Research suggests immigrants to Britain contribute far more to the economy than they take out and are significantly less likely to claim benefits than British-born citizens.

Doctors' representative body the British Medical Association (BMA) said the problem of health tourism had been exaggerated and has warned that its members will not get involved in checking patients' immigration status.

Cameron's speech was widely seen as an attempt to stem a trend which has seen many supporters of his Conservative Party shift their allegiance to the anti-immigration, anti-EU UK Independence Party (UKIP).

If sustained, the trend threatens to cost the Conservatives any chance of retaining power in the next general election, which is due by 2015.

In France, the FN is campaigning for French nationals to be given preferential treatment in access to social housing and for jobs where an employer has a choice between equally qualified candidates.

The far-right party, led by Aliot's partner Marine Le Pen, also wants family allowance, currently available to all households with two or more children, to be stopped for families originating from outside the EU.