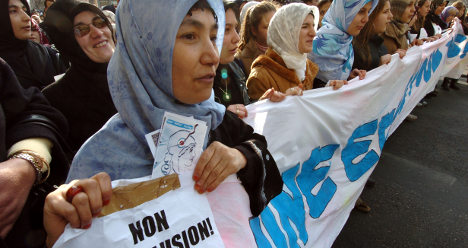 In recent days a new front has been opened up in the age-old debate about secularism in France – namely the wearing of the Islamic veil and other religious symbols in the workplace.

Two opinion polls published in recent days reveal the French are very much in favour of introducing a ban.

A whopping majority – 84% – of the French people now oppose the wearing of the Islamic veil or headscarf in private workplaces frequented by members of the public, according to a poll published on Sunday by regional daily Ouest-France.

Furthermore, 86% would support a law banning all religious symbols from any workplace centred on children, such as a school or crèche, according to a survey published on Monday by the Parisien.

The same poll found that 83% would be in favour of outlawing religious clothing or symbols in all private businesses.

The surveys were conducted in the aftermath of a landmark ruling by the Cour de cassation (Court of final appeal) on March 19th, which quashed the sacking of a nursery school assistant who had been fired for refusing to remove her Islamic veil.

Although the public as a whole would seemingly be onside, religious groups and other rights groups would no doubt protest against the ban.

"A new law is not necessary. In France there is an obsessive fear over Islam which is trying to reawaken in the aftermath of  this ruling," sociologist Michel Wieviorka told Le Parisien on Monday.

"With the municipal elections just months away it is the National Front who will benefit from this ongoing debate."

Since 2004, it has been illegal to wear or display conspicuous religious garments or symbols – such as crucifixes, Islamic headscarfs, or Jewish Kippah's – in France’s state schools, but government ministers have suggested in recent days that the law could soon be adapted to apply even to private workplaces.

Speaking after the court of appeals ruling that the BabyLoup creche's sacking of Fatima Afif represented discrimination on religious grounds, government spokeswoman Najat Vallaud-Belkacem said ministers would consider imposing legislation to uphold the principle of secularism in private work places.

Opposition to wearing the veil in private workplaces comes from all sides of the political spectrum, according to Sunday’s Ouest-France survey, which was conducted last week in the aftermath of the ‘Baby Loup’ ruling.