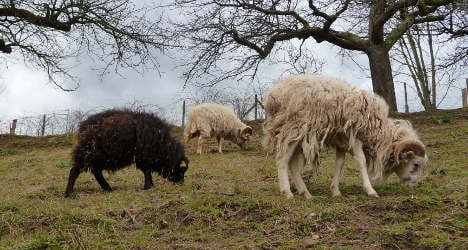 File photo of a flock of Ouessant sheep: 4028mdk09/Wikimedia Commons

It’s all part of an experiment in ‘eco-grazing’, an effort by Parisian authorities to keep down fuel emissions, and avoid the use of machines and chemical weedkillers.

A group of Ouessant sheep, transported from the island of Ouessant, off the coast of Brittany, have been tasked with the upkeep of a 2000m² green space owned by the French capital’s archives service, in the 19th arrondissement.

Starting on April 3rd, the woolly gardeners – known for their stamina and short tails – will be expected to do what they do best, and keep the grounds tidy and free of weeds, until the trial run ends in October.

Between grazing periods, the Breton sheep will be put up in the picturesque surroundings  of ‘Ferme de Paris’ (Paris farm), according to weekly magazine Atlantico.

If the experiment works, the Ouessant sheep could be kept on by the city and put to work tending to more significant and well-known green spaces such as Bois de Vincennes or Bois de Boulogne, Paris’ two largest public parks.