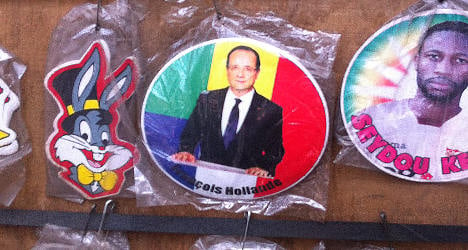 On a market stall in the Malian capital, stickers of Lionel Messi, Madonna and Osama bin Laden fight for space with the far more popular image of Francois Hollande, the French President.

Other stalls offer tricolours and T-shirts bearing pro-French slogans as Mali, bursting with gratitude over France's intervention to drive Islamists out of its northern cities, celebrates its former colonial ruler like never before.

"Madonna isn't successful anymore, now it's all about Francois Hollande", said Ousmane Traore, a stall holder in Bamako, who is doing good business selling stickers of the French leader for a few dozen francs (cents).

"When someone is successful, their sticker sells very well. What works here is Hollande and Sanogo," he says, referring to junta chief Amadou Sanogo, who took power in a coup a year ago and remains popular and influential.

A nearby trader says he has sold out of stickers of Hollande – but they can be found attached to the handlebars of motorcycles across Bamako, 53 years after Mali gained independence from France.

A small television in a shop a few metres away shows Hollande announcing the imminent restoration of Mali's sovereignty thanks to the French-African operation launched in January to drive Islamists out of the north of the country.

In the northern city of Gao, festooned with tricolours since the French ousted Al Qaeda-linked militants there in January, it is not uncommon to see Malians with T-shirts bearing the slogan: "Thank you to France for its readiness and commitment."

"I never imagined that so many Malians would buy the French flag. The first days after intervention were surreal," said Souleymane Drabo, a columnist for daily newspaper Progress.

"Anti-French sentiment was quite strong in Mali at the time of independence and, in the immediate post-colonial years, very nationalistic," he said.

Suspicion and distrust used to be the norm, but there has been a "complete reversal" since the intervention, Drabo told AFP.

Older Malians who were around during the struggle for independence would be "frustrated at having to owe their salvation to the former colonial power", he
said.

Amadou Sanogo led a group of fellow mid-level officers to overthrow then-president Amadou Toumani Toure on March 22nd last year, overturning what had been considered one of west Africa's most stable democracies.

The efforts of France and regional powers to quickly sideline the junta after the coup emboldened a very critical anti-Paris rhetoric in pro-Sanogo circles.The coup precipitated the fall of northern Mali, first to ethnic Tuareg separatists and then to Al Qaeda-linked Islamists who enforced a brutal version of sharia Islamic law through amputations and summary executions.

A military intervention launched in January by French and African troops chased the rebels from the region's main cities.

This French-led war on "terrorists", still being played out in the mountains of Mali's remote northeast, has largely muted the most critical voices. The Malian press even noted the birth of "Hollande" babies and little "Damiens" honouring Damien Boiteux, the first French soldier killed in Operation Serval.

This great wave of goodwill has not come, however, without a gnashing of teeth in intellectual circles.

In an article published on the Slate Africa website, Malian writer Manthia Diawara welcomed the help of France but did not hide the anguish he maintains it necessarily entails.

"I felt the French intervention in Mali was a dose of realism that we needed to take with a lot of humility and indeed shame, because I thought that my country was different from… the banana republics… where people, seeing the white soldiers arrive, celebrate like children at the sight of Father Christmas," he wrote.

For Diawara, the situation reflects the "failure" of Malian independence and signals a "full return to French hegemony".

Not everyone sees Mali's new welcoming attitude to the French as politically or culturally significant in the long-term, however.

"Francophile fever is falling away," columnist Souleymane Drabo cautioned. "People are returning to their everyday problems."