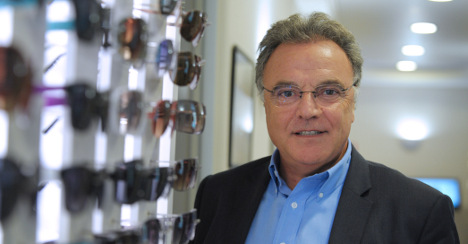 "Alain heard the news last night, through the media, and he's amazed,” said his spokeswoman on Sunday.

The famed owner of an international chain of opticians bearing his name, had loaned the aircraft to the Lyon-based Transhelicopter Services company.

On March 22nd, four French nationals – as well as several local police officers and customs officers – were arrested in the Dominican Republic on suspicion of being part of a drug-trafficking network about to transport the cocaine to Versailles, close to Paris.

A lawyer for Afflelou claimed he would “take the necessary steps to establish what happened”, and that a letter “demanding an explanation” had been sent to the French leasing company, according to regional daily Ouest-France.

Afflelou caused controversy in France in December when he condemned the French government for engaging in a “trench warfare” against entrepreneurs and others “trying to succeed”.

Announcing that he was moving to Britain, Afflelou seemed to suggest France’s “unjust and confiscatory tax system” was leading the country down a path towards the bloody, anti-business recriminations of the 1789 Revolution.