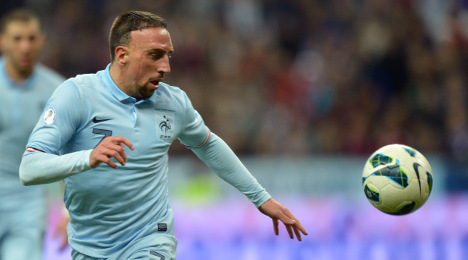 Olivier Giroud gave France a nerve-settling lead on the stroke of half time, with Mathieu Valbuena adding a second shortly after the restart and Franck Ribery making it three around the hour mark.

The eye catching win maintained France's renaissance under Didier Deschamps and gave Les Bleus the perfect preparation ahead of their date against the world champions in four days time.

With Spain held 1-1 by Finland, France moved two points clear of the 2010 World Cup victors ahead of Tuesday's match-up with Vincente Del Bosque's side back at the Stade de France.

The Arsenal striker, watched by his club coach Arsene Wenger, on commentating duty for French television, was his third wearing the national shirt.

It came after a nervy 45 minutes for Deschamps's team with the up-for-it Georgians only denied by excellent work between the French posts by Lloris.

The Tottenham keeper had to be at his most athletic to tip Ucha Lobzhanidze's long range punt wide, having earlier also kept a shot from Aleksandre Amisulashvili at bay.

France had plenty of opportunity to score before Giroud's header, with notably Ribery hitting the crossbar in the opening minutes.

Georgia, who had contained Spain until the 86th minute when they met last September in Tiblisi, fell further behind two minutes after the restart, when Valbuena struck a right-footed half volley into the far top corner after being set up by Ribery.

The ever present forward then got on the scoresheet in his own right, the Bayern Munich star racing onto Valbuena's through ball down the left, shooting low past Loria.