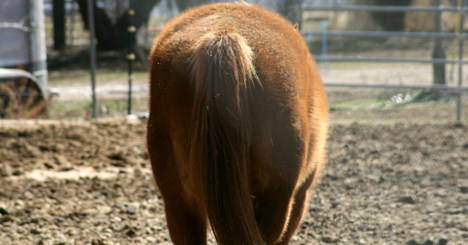 The proprietor of several horses strolled into his stables in a small town in the Beaujolais region of France to find an elderly local man in a severely compromising position with one of his mares.

At first the suspect denied he was trying to get his hands on some horse meat and claimed he had been trying to stop the horse from escaping their enclosure.

However, the owner called the police, at which point the pensioner’s denial collapsed. He admitted to attempting "sexual relations" with the female horse after acting under an uncontrollable urge, according to regional daily Le Progrès.

According to Le Progrès, the alleged attacker admitted he had already forced himself on the mare on two or three previous occasions.

The suspect, who has lived alone since his wife moved into a retirement home, faces a possible two-year prison sentence and a €30,000 compensation payment to the owner of the horse.