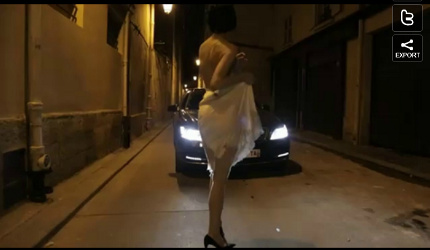 Screenshot from the video

The three minute clip sees top models ditch the catwalks for the pavements of the streets of Paris to advertise the next autumn/winter collection of the famous French fashion giant.

In the clip, released earlier this month, models including Georgia Jagger wear high heels and sexy lingerie to play the part of prostitutes trying to pick up clients in the French capital. The film then ends with the models displaying their clothes on stage at the famous Louvre museum.

Fashionistas may appreciate the artistic merits of the film but it has not gone down well with feminist organizations in France.

“Once again naked women are used to create a buzz or sell clothes,” Inna Shevcenko, spokeswomen for the French branch of Femen, a militant feminist group which recently staged a topless protest in Notre Dame Cathedral.

“It’s a disturbing video because it combines two different worlds – the refinement of haute couture and the violence of the sex trade,” a representative of  the group told Le Parisien.

For its part, Louis Vuitton has distanced itself from the video, which was made for British fashion publication Love Magazine and directed by James Lima.

The fashion giant said it had nothing to do with the making of the clip, however Marc Jacobs, the artistic director of the brand does feature in the advert wearing a pair of red pyjamas.