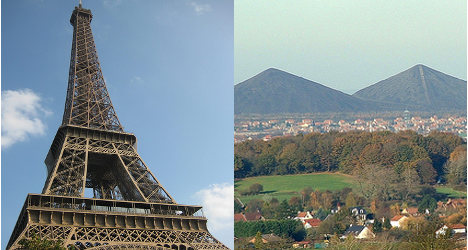 The Eiffel Tower - the iconic symbol of Paris and right, the slag heaps of Nord-Pas-de-Calais, one of the poorest regions of the country. Photos Terrazo/OliBac/flickr

The opposition UMP mayor rounded on the Socialist government, picking up on its much-heralded recent announcement that it would invest €30 billion in a new Grand Paris ‘super metro’ as part of a project to upgrade the transport system for the capital and its surrounding Île-de-France area.

Marseille, on the other hand, was getting “nothing”, Gaudin claimed, denouncing the disparity as “scandalous”.

His words opened up old sores on the question of Paris versus the ‘provinces’. Here, The Local speaks to two well-placed officials who put up a stout defence of the French capital.

Jean-Paul Huchon, President of the Regional Council for Île-de-France:

“To put the Île-de-France region in proper perspective, let’s look at a few figures. One French person out of every five lives in Île-de-France, and the region produces 29% of France’s GDP.

“The region doesn’t receive any sort of special treatment. Like any other global metropolis – New York, Shanghai – Île-de-France has real challenges in areas like transport, jobs, housing, and they call for exceptional measures.

“On the question of whether the Paris region receives too much investment, the fact is that for 30 years this region was left abandoned.

“Transport investments were made in the TGV network, and not in the Paris metro, or the RER [regional rail network].

“Those two rail systems represent 40 percent of French train traffic, despite only covering ten percent of the country’s territory.

“When it comes to the ‘Grand Paris’ plan, it’s the local economy that is paying for it – up until now, funding for the ‘Grand Paris Express’ has been based on revenue from local taxes.

“This project is a chance to develop the economy of our region. It will build up our ability to attract foreign capital and investment, create 250,000 jobs and improve the lives of millions living in Île-de-France.”

“The Grand Paris Express will be an engine for the regional economy, and will benefit the entire French economy as well.”

Gilles Mergy, the general delegate for the Association of French Regions (ARF):

“Paris represents the lungs of the country, so it’s positive to invest in the French capital. The Grand Paris project is needed because Paris and the Île-de-France region is the heart of the country’s economic activity and it will have a positive knock-on effect for the rest of France.

"We have to remember that some of the poorest areas in the country are in the Île-de-France region. These cannot be forgotten about.

“We cannot afford to have a war between our own regional territories so that Île-de-France is positioned against the rest of the country. There needs to be a unified approach.

“There is often a feeling of jealousy in the provinces towards Paris, because it is a big city, with big business and money. Even in football we see it, now that the Qataris have bought Paris Saint-Germain.

“There is also an onus on the local authorities throughout France to boost their regional economies to try to make the country more equal and to discourage the population all moving to Paris. They have to promote their territory and the companies that are there.

“We have to remember that this is not just about Paris versus the rest of France. There also needs to be equality between the departments, within each region, because there is a risk companies will simply move 100km down the road, if financial conditions are better there.

“Since 1982, France has become less centralized and the regions need to have more independent power to make their own decisions. We do need to move towards more decentralization."