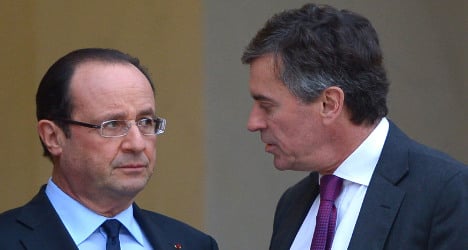 For some it was a long time coming but Jérôme Cahuzac, 60, France’s budget minister finally resigned on Tuesday after prosecutors announced they were extending their official investigation into allegations he hid assets from the French tax man in a Swiss bank account.

The downfall of the minister charged with fighting tax fraud – over money laundering allegations – could not have been more embarrassing for Hollande, whose popularity has plummeted according to opinion polls, and comes at a time when he is desperately trying to cut France's public deficit.

Cahuzac's decision to stand aside was also bad timing for Prime Minister Jean-Marc Ayrault. On Wednesday the PM will be forced to defend the government’s actions in a key speech to parliament after the opposition filed a motion of no confidence denouncing the administration's economic policies.

He can expect to get a rough ride from UMP leader Jean Francois Copé.

Philippe Marlière, professor of French politics at UCL in London told The Local things could yet get worse for a president who had promised before being elected that his government would be “exemplary”.

“Things could really unravel very quickly for the government if investigators prove that Cahuzac was the holder of the Swiss bank account,” Marlière said.

With Cahuzac’s political clout and economic nous recognised on both sides of parliament, Hollande has lost a heavyweight member of his government.

“Cahuzac was one of Hollande’s main allies when it came to implementing unpopular austerity policies. He was an important piece of the government jigsaw," Marlière said.

“A self-proclaimed liberal and modernist he was a true follower of austerity policies and that’s probably why Hollande kept him so long. But it was, in the end, a lose-lose scenario.”

The scandal is also untimely as according to recent polls, Hollande is struggling to convince the French people that he is the man to re-ignite the economy.

“Cahuzac’s resignation comes at the end of the first cycle of François Hollande’s five years in office, " said Christophe Barbier, editor of L’Express magazine. "It has now become urgent for the president to address the French people and to try to convince them.”

Despite the resignation, Cahuzac continues to receive the support of fellow members of the government. The man nominated to be his successor, Bernard Cazeneuve said: “I believe in the sincerity of Jérôme Cahuzac. It will be difficult to replace a friend."

After resigning, Cahuzac immediately repeated that he was "innocent of the slanderous allegations made against me."

Two senior judges have been appointed to lead the investigation into Cahuzac: Roger Le Lloire and Renaud Van Ruymbeke. French daily Liberation reported on Wednesday that French prosecutors have asked their counterparts in Switzerland to help with the investigation.

As well as dealing a serious blow to Hollande's administration, Cahuzac's resignation represented a landmark moment in the French media landscape.

The story was broken, in January, by Mediapart, a news website with a hard-hitting style and investigative culture that contrasts with the generally more cautious approach of traditional print and broadcasting media in France.

"This could be the moment when this kind of journalism becomes the model to follow in France," UCL's Marlière said.

The announcement of a criminal investigation based on Mediapart's reports is a significant boost to the credibility of the site, acknowledged editor-in-chief Francois Bonnet.

"Our only satisfaction is in seeing the quality of our journalism recognised," Bonnet told AFP.