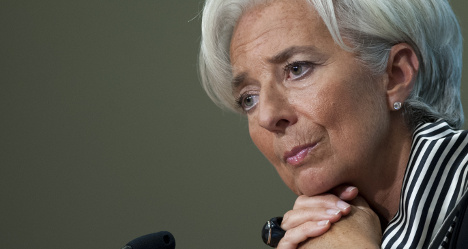 French police on Wednesday carried out a raid on the Paris home of IMF chief Christine Lagarde in connection with a probe into her handling of a high-profile scandal when she was France's finance minister.

"Mrs Lagarde has nothing to hide," her lawyer Yves Repiquet told AFP, adding in a statement to Reuters: "These raids will serve to show the truth, and will help clear my client of any criminal liability."

The investigation concerns Lagarde's 2007 decision to order a panel of judges to arbitrate in a dispute between disgraced tycoon Bernard Tapie and the bank Credit Lyonnais, which led to Tapie being awarded €285 million.

Tapie is in infamous figure in French politics after being convicted and jailed in 1997 for football match-fixing. He also has a conviction for tax fraud.

The IMF have refused to comment on the raid.

"As we have said before, it would not be appropriate to comment on a case that has been and is currently before the French judiciary," said IMF spokesman Gerry Rice in a statement.

"Prior to its selection of the Managing Director, however, the IMF's Executive Board discussed this issue and expressed its confidence that Madame Lagarde would be able to effectively carry out her duties as Managing Director," Rice said.

France's Court of Justice of the Republic (CJR), which investigates suspected wrong-doing by ministers, first announced it was launching an inquiry into Lagarde's role in the arbitration procedure, in August 2011.

In the same month a court document emerged which criticized the arbitration process. It contained "numerous anomalies and irregularities" and says Lagarde appeared to have "given voting instructions to representatives" on a key public body in relation to the payout.

Lagarde has always denied any misconduct. In the past her lawyer, Yves Repiquet, said the case was politically motivated, driven by "suspicion abusively cast on Christine Lagarde by a handful of opposition members of parliament for political ends."

"I have a perfectly clear conscience," Lagarde has said.

At the end of January, police investigators raided the homes of Tapie himself, as well as Lagarde's then ministerial chief of staff Stéphane Richard, who is currently CEO of France Telecom.

It is of-course not the first time an IMF chief has been the subject of a damaging investigation by authorities. Her predecessor and compatriot, Dominique Strauss-Kahn was forced to quit after he was accused of sexually assaulting a hotel maid in New York.

The raid on the home of the high-profile Lagarde, comes just a day after France's Budget Minister Jérôme Cahuzac was forced to step down amid allegations he hid assets in a Swiss bank account.