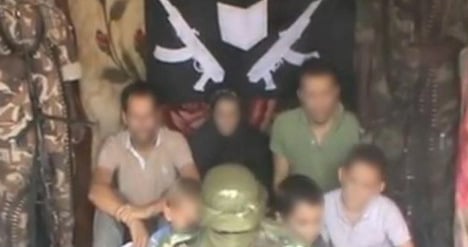 An image of the kidnapped family taken from a video released last month. Photo:AFP

In the recording the man appears to read from a statement pleading for the French ambassador to work for their release.

He identifies himself as Tanguy Moulin-Fournier and reads the statement in French and in English, detailing the family of seven's February 19 kidnapping in Cameroon, which he says occurred "25 days ago."

The recording obtained by AFP is only audio, though it was said to have been taken from a video.

The man says the family was abducted by Jamaatu Ahlisunnah Lidda'awatiwal Jihad, what the Nigerian Islamist extremist group known as Boko Haram has said it wants to be known as.

He says the conditions of their capture have becoming increasingly difficult, specifically mentioning the four children, saying the youngest was four years old.

He repeats previous Boko Haram demands made in a YouTube video posted online in February calling for the release of prisoners in Cameroon and Nigeria.

Cameroon has said the victims, which included the couple, their children and an uncle, were taken over the border into restive northeastern Nigeria after their abduction, though their precise whereabouts have remained unknown.