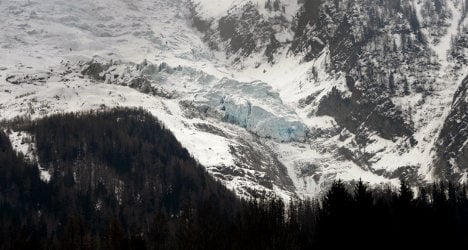 The Bosson Glacier wheree a 48 year-old Briton and his 12 year-old son set off for a walk the previous day. Photo: Jean-Pierre Clatot/AFP

Their bodies were found a day after contact was last made with the 48-year-old father, who had called an emergency centre to say that his son had had a fall and was out of reach.

Rescuers lost contact and launched their search with little information on the exact location of the hikers.

Britain's Foreign Office later named the pair as Peter and Charlie Saunders and issued a statement on behalf of the their family.

"Charlie was always full of life, had a really happy temperament and loved spending time with his father," it said.

"Peter was fantastic at making things happen, resourceful, with a positive approach to life. They will both be sorely missed by friends and family alike.

"We would like to take this opportunity to thank the French rescue services for all their efforts," it added.

The father and son had ventured into the sprawling Mont-Blanc range's Bossons area without adequate equipment, Patrice Ribes, from the gendarmerie in the nearby town of Chamonix, told AFP.

A helicopter spotted their bodies at 0600 GMT on Sunday, at an altitude of 1,600 metres.

This winter has been a bad one for Britons visiting the Alps region. On January 30th, 19-year-old Lucy Sallis from Bognor Regis was found dead in an outdoor swimming pool at the Alpe d'Huez ski resort.

Two weeks later, British soldier Simon Daw, 27, from Cardiff in Wales went missing after a night out with friends at the Deux Alpes resort.

According to the British Embassy ten British families have asked for consular assistance because of a death in the French Alps this winter. None of these, however, were caused by skiing accidents.

The overall death toll in the French Alps this season, from all nationalities, continues to rise, with a shocking ten fatalities from avalanches and accidents occurring in the week of March 4th alone.

Elsewhere on Monday, Meteo France, France's national meteorological service has kept in place from Sunday evening an orange alert for avalanches in the Hautes-Alpes department – the second-highest risk level available.

PARTNER CONTENT
Why we love Britain: Our ‘Best of Blighty’
Url copied to clipboard!