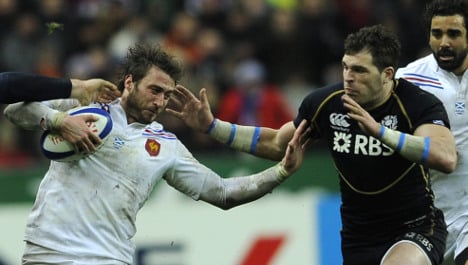 Second-half tries by Wesley Fofana and Maxime Medard saw them to their first win of the tournament, but a late try by Tim Visser reduced the margin and that left them rock bottom because of a worse points difference to Ireland.

"We were controlling the game well but couldn't get points on the board," said Fofana.

"This has been a problem throughout the tournament — we have a good first half where we have the ball but can't convert. In the second period, we succeeded in achieving what we had talked about.

"We were a little worried towards the end, but we are happy to have won the match."

"We've had a half decent tournament. We're a team that never gives up. We're on an upward curve, we're trying to learn. There's still a lot of work to do and we're just looking to improve every time we play."

Scotland opened the scoring when Greg Laidlaw slotted over a penalty in the eighth minute.

France fell further behind in the 17th minute when Louis Picamoles was penalised for impeding a jumper in the lineout and Laidlaw landed a penalty from long range for 6-0.

France upped the pressure after that and camped inside the Scots 22 with the visitors somehow holding them at bay with terrific tackling.

The hosts gained great position again after an outrageous piece of skill by wing Vincent Clerc who, unable to catch Frederic Michalak's kick to the right wing, volleyed it infield where it was caught by Fofana.

However, they were again unable to turn it into points.

The Scots, though, had their moments in the final five minutes of the half as Max Evans — who had replaced the injured Sean Maitland — gathered the ball in midfield and broke two tackles before chipping into the French 22.

Fortunately, for the French, full-back Yoann Huget beat him to the ball over the tryline but it didn't prevent the hosts from exiting at half-time to jeers.

The second-half was brought to life not by the rugby but by an altercation between a clearly unsettled Michalak and Scottish fullback Stuart Hogg.

It carried on while play was still going on and eventually the two had to be separated by team-mates and were admonished by referee Nigel Owens.

The French fly-half pulled himself together sufficiently to convert a penalty a couple of minutes later and make it 6-3 and then levelled the game in the 49th minute.

The bust-up with Hogg seemed to have galvanised Michalak as he put Scotland under pressure almost immediately after that with a delightful chip into the 22 which the Scottish had to knock into touch.

The Scots were reeling and conceded another penalty in the 54th minute which Michalak had no trouble converting to give the hosts the lead.

The visitors got back on level terms shortly before the hour mark, Laidlaw kicking the penalty after the French were adjudged to be offside.

French replacement prop Vincent Debaty then charged down the left and instead of passing inside, with the try line begging, went to ground and the Scots ended up with a penalty.

However, his Clermont clubmate Fofana showed him how to finish as he broke free on the left and brushed past Hogg to touch down under the posts — Michalak converted to make it 16-9.

Emboldened, the French addded a second try shortly afterwards as a great break by Mathieu Bastareaud saw him fall short.

But from the resulting ball Medard went over with Maxime Machenaud converting as Michalak lay prone on the ground.

Michalak had to go off as a result with his left arm being held gingerly by the medical staff.

The Scots refused to give up and Visser scored a deserved try with the clock ticking down which was converted.