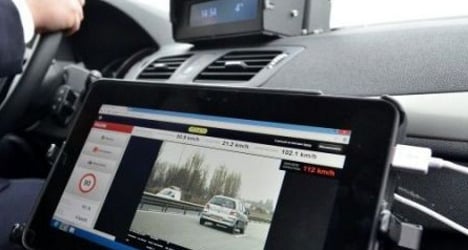 From Friday, 20 unmarked French police cars will be roaming the highways of 18 departments throughout the country, armed with the newest weapon in the battle to cut the number of road deaths caused by speeding – the mobile speed camera.

The cameras will be fixed on the dashboard with a radar hidden behind the number plate to detect a car's speed.

Explaining the need for the new technology, France’s road safety authority said in a statement on Friday that “excessive speed is a major cause of road deaths, and was responsible for 26% of fatal accidents in 2012".

The government plans to increase number of the new generation radars to 300 between now and 2016.

Although the cameras will be in unmarked cars officers will have to wear their police uniforms, which might be the only signal that could give away their presence on the motorway. Drivers rushing down to the south of France this summer should also be careful who they overtake as for the first few months police will only penalize cars who pass their own vehicle at top speed.

A statement from the anti-speeding Victimes and Citizens group welcomed Friday’s introduction of the mobile radars on to French roads.

“This is the best possible response to devices and [smartphone] applications for detecting and cheating speed radars,” the group was quoted as saying in Le Parisien.

However, a leading motorists’ rights group has reacted with caution to the machines. Speaking after the unveiling of the mobile radar project in February, Pierre Chasseray, head of French drivers organisation ‘40 millions d'automobilistes’ told The Local he was concerned the new device would be used to "trap" ordinary road users.

The devices are designed to be able to take accurate photos from inside moving vehicles and will gradually replace the older generation of radars, first deployed in 2004.

Any speeds registered by the cameras will be reduced because of a 10 percent margin of error so anyone driving on a French autoroute (motorway), where the limit is 130kph, will have to be driving at 146kph to be snared by the new radars.