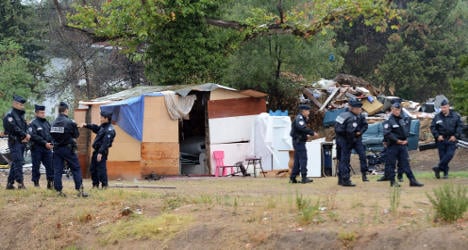 Policemen guard after the evacuation of a Roma camp on August 30, 2012 in Marseille. Photo: Gerard Julien/AFP

The threat followed comments by Valls in an interview with rightwing daily Le Figaro published Friday, in which he claimed around 20,000 Roma migrants from Bulgaria and Romania had no interest in integrating into French society.

This, he said, was "for cultural reasons or because they are in the hands of begging or prostitution networks."

Laurent el-Ghozi, founder of the collective Romeurope said: “What is he trying to do apart from scapegoat the Roma population in the media. Not only does he target a minority on an ethnic and racial basis- which is illegal- his words legitimise the arguments of racists and xenophobes."

"This interview is a very bad sign," the organisation said in a statement. "It signals a hardening of a policy that has been in place since 2003."

On Thursday Valls told another French newspaper that France will continue its controversial policy of dismantling the make-shift Roma camps. Around 20 expulsions have already been sanctioned by a French court and will take place between now and summer.

As well as considering a complaint under French law, Roma Voice said they would be reporting Valls's latest comments to the European Union, which has repeatedly questioned the legality of France's policy of systematically dismantling illegal camps and repatriating Roma to Bulgaria and Romania.

The policy, which has also been criticised by the United Nations' human rights arm and other watchdogs, has failed to significantly reduce the number of Roma living in the makeshift settlements, which Valls confirmed remained around 20,000.

France provides free flights and financial incentives for Roma willing to be repatriated to their countries of origin. But they cannot be prevented from returning under European Union freedom of movement rules.

Under pressure from the EU and some of his colleagues in the Socialist government, Valls agreed last year that camp clearances should not take place without alternative housing plans being put in place first.

But that policy was applied in only 15 of 63 cases in the second half of last year, according to a report published last month by the European Association for the Defence of Human Rights (AEDH).

The AEDH said almost 12,000 ethnic Roma were evicted from camps across France in 2012, 80 percent of them forcibly and around two-thirds of them in the second half of the year, after the Socialist Party came to power.

Valls justifies forced evictions on the grounds that the often squalid camps represent a threat to the health of their inhabitants and, when they are located near roads or rail lines, can be dangerous.