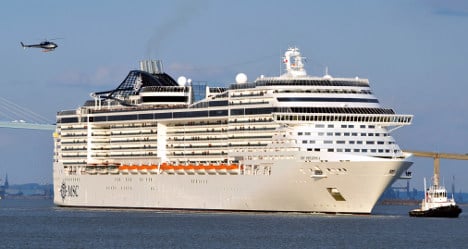 The Preziosa was initially ordered by Libyan state shipping firm GNMTC in 2010, before shipbuilder STX France sold it on to Swiss-Italian operator MSC Cruises a year ago after Libya stopped making payments amid the revolution against slain leader Moamer Kadhafi.

It measures 333 metres long, can hold 4,300 passengers and 1,400 crew, has four swimming pools, and is decked out in black and purple velvet, white-veined black marble and giant mirrors in front of passengers' beds.

At a christening ceremony on Thursday, French Industrial Renewal Minister Arnaud Montebourg said the Preziosa was a symbol of French shipbuilding prowess.

"Look at [the] 'Made in France' [brand], as they say, look how magnificent it is," he said, announcing €100 million in state aid to the industry, including €80 million for projects such as fuel-efficient cruise liners.

Shipbuilding employs some 70,000 people in France and generates annual turnover of €10 billion.

The Preziosa measures among the 10 largest ships in the world. But MSC loses out in the size battle to Miami-based Royal Caribbean International, which has five ships larger than the Preziosa.