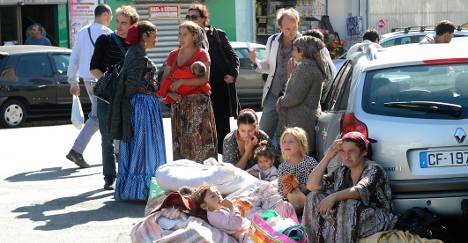 The policy of breaking up the camps began under conservative president Nicolas Sarkozy in 2010 and since coming to power last May, France’s Socialist government has continued the clearances.

The action has provoked heavy criticism from certain human rights groups, but the government claims the camps are dangerous because they are unsanitary and pose a danger to the local community.

In an interview with French daily Le Parisien on Thursday, Interior Minister Manuel Valls said that keeping the 400 or so makeshift installments that have been set up in France was “not acceptable”.

“We cannot accept this intolerable situation. The closing of these camps is more essential than ever and it will continue. We are taking this action with respect to the law and the safety of residents.

“I want to fight against the drug trafficking and crime that come hand-in-hand with these camps and cause human misery.”

According to Le Parisien, courts have already sanctioned 20 expulsions, which will be carried out between now and summer.

Two thirds of the 400 camps in France are in the Ile-de-France region around Paris. In the more disadvantaged Seine Saint Denis department, there are 130,000 installments, which are home to an estimated 8,000 Roma.

A survey published earlier this year revealed France evicted almost 12,000 ethnic Roma from makeshift camps across the country in 2012. Two thirds of that total came in the second half of the year, after the Socialist Party came to power.

Speaking to The Local after the survey was published, Victoria Vasey from the European Roma Rights Centre criticized the Socialist government.

"This is incredibly worrying and very disappointing given that François Hollande made a pre-election pledge to change the way the Roma were being dealt with in France. But it just looks like business as usual,” she said.

"France should be working on projects to ensure that the Roma who exercise their right to travel within the EU can integrate in France."

But Valls was unwavering on Thursday.

“We will act humanely and offer the necessary social support with the object of getting the children into schools and, where possible, giving the Roma access to housing and work,” he said.