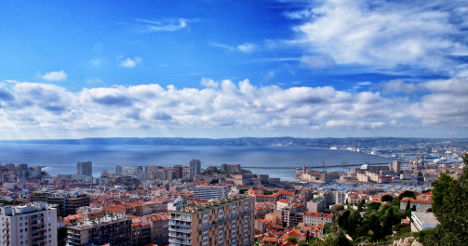 File photo of the city of Marseilles. Photo: Geoff Livingston

Numerous shots were fired in an alley next to a supermarket and close to the entrance of a residential tower block in the rundown Bleuets estate at around 1030 am in what public prosecutor Jacques Dallest described as an attack of "enormous savagery".

"These people have been executed," he said. "What concerns us the most is that this happened in broad daylight, on a Wednesday morning in the presence of children."

The three men who were attacked were all known to police, having criminal records for minor offences.

Police believe a dispute linked to the drugs trade is the most likely explanation for why they were attacked by men who appeared in a VW Golf that was found burnt-out near the scene of the crime.

Wednesday's murders follow the execution-style killing of a man who had just come out of the city's Baumettes prison on March 9th and the slaying of another ex-prisoner, who was shot in the face last month.

A burnt, bullet-riddled body discovered in woodland, inland from Marseille, has also recently been identified as being that of a known drug dealer from the city's troubled northern quarter.

The latest spate of incidents has followed a relative lull in the wave of violence that last year left at least 24 people dead in the southern French city and triggered calls by some politicians for the army to be sent in.

That was rejected by the Socialist government, which has instead pinned its hopes on the creation of special security zones in the city's most troubled neighbourhoods.

Critics say they are more in need of economic investment to address structural problems linked to poverty, unemployment and the marginalization of ethnic minorities.

"With the €30 billion that have been allocated to 'Grand Paris', the state has shown its priorities do not extend beyond the boundaries of the capital," Marseille mayor Jean-Claude Gaudin, a member of the opposition UMP, said in the aftermath of Wednesday's attack.