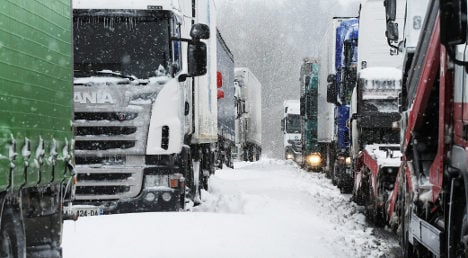 Trucks blocked on a road near the town of Rouffigny, north west France. Photo: Alain Jocard/AFP

The snowfall that blanketed the north of France on Tuesday moved south and east overnight, dissipating as it went, but the real menace on Wednesday morning was the icy temperatures, with the mercury dropping overnight to between -10 and -13 °C in the Nord-Pas-de-Calais region, and between -3 and -8° C in Normandy and around Paris.

The big overnight freeze has turned snow covered roads into ice rinks and authorities were warning on Wednesday morning that meant roads and pathways had become dangerously slippery.

Motorists are advised that the RN 13 (‘route nationale’) is off-limits between Caen and Cherbourg, and is likely to remain so for the rest of the day.

SNCF said the cross-Channel Eurostar service to London and the Thalys service to Brussels had resumed around 0700 am (0600 GMT). Eurostar has announced an “amended timetable”, and warned travellers to expect journey times of between 40 and 60 minutes longer than usual.

High-speed train links were also restored between Paris and regional centres like Amien, Rouen and Caen, though TGV rail services have been limited to 170 km per hour in certain sections of the north, with passengers being advised to expect journeys extended by 20 or 30 minutes.

"SNCF put up more than 1,000 customers in hotel rooms near stations and in train sleeping carriages that were made available," the rail authority said in
a statement.

"For 24 hours, 10,000 employees have been working to remove snow from the rail lines and re-establish service," it added.

The train services were suspended when a severe late-winter snowstorm battered northwestern Europe on Tuesday, causing widespread travel chaos with the cancellation of hundreds of flights at main airports.

Blizzard-like conditions – coming only eight days before the official start of spring – also knocked out power to thousands of people in France and left motorists stranded in their cars.

France was the worst affected but Belgium, Britain, Germany and the Netherlands also reported major disruptions.

Paris Beauvais airport, which serves all Ryanair passengers into and out of the French capital, was closed on Wednesday, along with Lille-Lesquin.