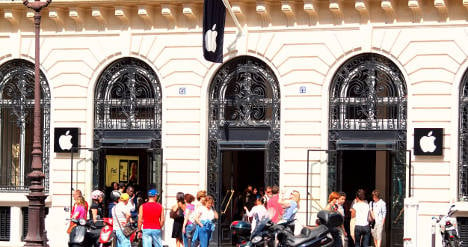 Apple, which has seven stores in France, was told by the court in Paris this week that it could not have its employees working between the hours of 9pm and 6am.

Trade unions greeted the decision as a victory. Eric Scherrer from the CFTC (French confederation of Christian workers) told AFP: “This shows the desire of the courts to respect our traditions about night-time work.

"We just ask that the law be respected," said Thomas Bordage from the SUD union (United Democratic Unitarians).

As a deterrent, the court set a provisional fine of €50,000 for each recorded instance that staff at Apple Retail France are found working late. The computer giant was also ordered to pay six employee unions a total of €10,000 in damages and interest.

Apple's flagship Parisian store, at Opéra, for example, is open from 9am to 8pm on Monday to Wednesday, and from 9am to 9pm between Thursday and Saturday. It is closed all day every Sunday.

By comparison, the Apple store on 5th Avenue in Manhattan is open 24 hours per day, on every day of the year.

Employee unions in France have in recent years intensified their legal efforts to protect the ban on nocturnal working hours, targeting major retail chains like Franprix, Bricorama and Monoprix in the courts.

According to Europe1 radio, Apple has decided not to appeal against the verdict.