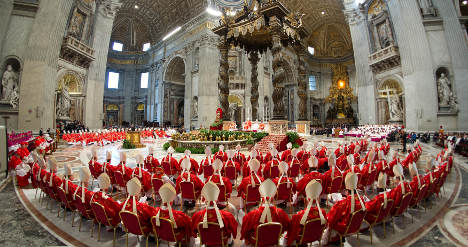 Catholic Cardinals gather at St. Peter's basilica in the Vatican City, before the Papal conclave to elect the next pope, which began on March 12th. Photo: AFP/Osservatore Romano

A recent survey conducted by Ifop found a staggering majority of French Catholics (between 77 and 85 percent) want to see the church change its positions on issues such as divorce, contraception and abortion.

Furthermore, a 2012 poll found that France has the world’s fastest-growing atheist population.

With the attention of the world's media focused on the 115 cardinals holed up in the Vatican this week to elect a successor to Benedict XVI, we ask: Is the Catholic Church is still a force in French society?

"There are four times fewer practicing Catholics in France today as there were 40 years years ago and the number of priests has dropped by the same number. There is a slight increase in the number of young people going to church in big towns where they have evening masses but in rural areas its becoming more and more difficult, with one priest sometimes in charge of running numerous churches.

"Despite the reduced number of practicing Catholics the church still plays an important role, especially when it comes to certain political debates, notably when it comes to defending private Catholic schools and the gay-marriage law when 800,000 protested in Paris. All those protesters were not Catholic but it was the influence of the church that brought so many out on to the streets.

"In political debates concerning immigrants or poverty the church will be a prominent voice, but in other areas the church is very careful because the hierarchy knows that many believers do not agree with their political stance.

"In terms of political parties we see more and more Catholic voters switching to the National Front."

“The church is still too powerful in France. In the past it was powerful on the ground among the people because there were priests in each town and village. But now, because there are not as many, the hierarchy of the church tries to make up for this by having a presence in politics.

“It tries to intervene in policy-making far too much. The Catholic Church forgets we are a secular country. It implies that we, the general public, are not rational, because we do not follow a faith or have a belief. The church should not give their opinions to politicians. That should only be done by the public.

“I think the media gives far too much attention to what the church says and this helps to give the impression that they are still a relevant force in France today. They end up having more influence than they should. The press are accomplices in this.

“On TV you see everyone talking about the election of a new pope, but it’s too much. He’s not that important.”

Johannes Robyn, president of the French Union of Atheists:

"Our upbringing means that for many in France the Catholic Church – despite its despicable track record – remains an inescapable moral force.

"Everyone talks, without a hint of embarrassment, about our 'Christian heritage' as a good thing.

"In fact, it’s not only in France that the Catholic Church is a political and social force, because the European constitution calls for a ‘consultation' with churches and religious groups when it comes to any social or ethical issues.

"However, more and more French people label themselves as having 'no religious affiliation', or indeed, as an ‘atheist’.

"Furthermore, there are plenty of others who call themselves Catholics, but have their own morality, without paying much attention to what comes from the Vatican.

"If we look beyond France, to Europe, we see that the political and ethical influence of ecclesiastical authorities is dwindling, except in certain exceptional countries like Poland."

“Yes. The church is important in France. Although there are a lot of people who would say the opposite, that the church is no longer a power in this secular country. They say the church presents an old model for society, but we are an important partner in French society, even if people don’t want us to be.

“Today we are there more than ever for the people that need us. Whether it’s with sick people in hospitals or to comfort others in times of grief, we act as a kind of shock absorber for them. Today we are more of a social force than a political force. We act to help those who have been excluded by mainstream society. We help and advise them in life.

“In terms of politics we try to wake up the conscience of politicians. We ask them questions just like other groups do if we don’t think they are paying enough attention to certain people. However, it’s not up to the church to write the law.

“The fact that the protests against gay marriage failed to change the government’s mind does not mean the church is losing influence necessarily. It's true we managed to mobilize a lot of people. But I think that was because it was an emotive debate.

"The church would not be able to do that for every issue. We had a really strong message on this issue because it was a question centered around life and the rights of children, and so on.

“The church does have to adapt to modern life, but our main role is to spread the word of Jesus Christ. If we can do that, we will be fine. Our aim is not to be important but to be truthful.”

“Yes, the Catholic Church is still a force in France today, but is it a positive force? I believe it’s a contradictory force because its believers, or a certain number of them, try to follow a different world.

“There’s a long history between France and the Catholic Church and a certain number of Christians still hold sway in France today because there are some strong and influential Catholic groups. The church also has influence because it contributes to charities and associations involved in areas such as development.

“In terms of politics there’s no particularly strong political party linked to the church these days, although there are a few powerful individuals involved in politics who are Christians. The church is involved in society in other ways.

“The Catholic Church needs to engage in the world’s problems in order to remain relevant, not ignore them.”