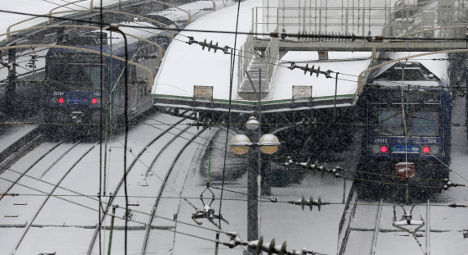 IN PICTURES: France hit by winter storm in March!

Winter returned to France with a bang on Tuesday causing severe travel disruption across the north of the country as well as in and around the capital Paris.

Trains services were severely disrupted with Eurostar, Thalys, RER and TGV trains all affected.  French rail bosses at SNCF were unable to say whether they would be able to get the service back to normal by Wednesday. SNCF is also trying to arrange accomodation for those that have been left stranded becasue of the cancellation of services.

So much snow has fallen in La Manche, north west France that nine supermarket roofs have reportedly collapsed under the weight. Many others have been forced to close out of safety fears.

La Manche was one of two departments of Normandy in northern France that passed from Orange to Red alert on Tuesday as the conditions caused by heavy snow and ice became more treacherous.

Calvados department was also placed on 'alert rouge' by Meteo France. The country's weather service asked all residents to remain indoors for their own safety.

Passengers on a train from Rouen to Le Havre were stuck for 16 hours overnight and ferry passengers were also forced to remain on board for hours after their ship was unable to dock at the port of Cherbourg.

Across the rest of northern France and Paris, 27 other departments remained on orange alert.

As Environment Minister Delphine Batho pointed out on Twitter, it is the first time a region has been placed on 'red alert' because of snow since the warning system was introduced.

According to Meteo France the red alert means residents must be "extremely vigilant", regularly keep up to date with developments and respect the advice and instructions of authorities".

Earlier the French Prime Minister Jean-Marc Ayrault activated a 'crisis cell' so ministers could coordinate efforts to deal with the fall-out of a fierce winter storm that has caused travel chaos across France.

"The inter-ministerial crisis cell, composed of all ministries affected by the snowfalls will coordinate resources to ensure the safety and movement of our citizens in the country," the PM's office said in a statement.

Ayrault was due to visit France's rail headquarters at Gare du Nord to assess the impact the storm has had on the country's train services.

Cross channel train operator Eurostar was advising all passengers not to turn up at train stations in either France, Belgium or Britain on Tuesday, "until further notice," after suspending services. Tickets can be changed or reimbursed, a notice on their website says.

As the storm hit northern France, more than 68,000 homes were without electricity and hundreds of people were trapped in their cars after a winter storm hit with heavy snow.

Three deaths in France have been blamed on the weather.  A man in his 60s found lying in 60 cm of snow on Tuesday morning in the town of Port-en-Bessin, Calvados and a 58-year-old homeless man found dead from hypothermia in the hallway of an apartment block in Saint-Brieuc in Brittany.

A man in his 40s, fell ill and died after visiting neighbours in Saint-Jean-des-Baisants, Normandy, though authorities could not categorically confirm that his illness was related to the weather, according to Ouest-France.

An accident near the northern city of Lille involving three cars that skidded in icy conditions on a motorway, left 14 people injured, including six firefighters.

26 regions in northwest and northern France were put on orange alert because of heavy snowfalls, which Meteo France said were "remarkable for the season because of the expected quantity and length of time".

Conditions were forecast to improve early on Wednesday.

Overnight on Monday nearly 500 cars were blocked near Cherbourg, where snowdrifts piled up 60 cm as winds reached 100 km per hour.

More than 68,000 homes were without electricity in Normandy and Britanny at one point, but the ERDF utility said their numbers were down to 500 on Monday night.

Because of the severe weather, civil aviation officials asked airlines to cancel up to 25 percent of flights from Roissy and Orly airports in Paris. Snow also delayed trains on the Paris-Cherbourg line as well as TGV high-speed trains.

At Paris Orly airport, a Tunisair airplane skidded off the runway upon arrival, though there were no injuries.

In Cherbourg, a ferry carrying 491 passengers from Ireland aborted its approach late Monday because of heavy seas and was expected to make another attempt early Tuesday.