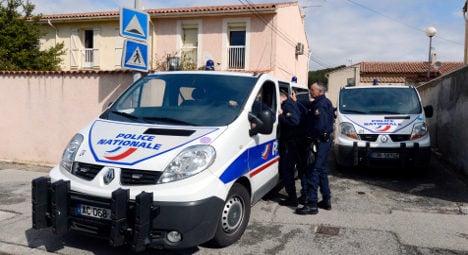 Police search the house in Marignane where the men were arrested on suspicion of terrorism on March 7th. Photo Gerard Julien/AFP

The three men, who police believe were part of a suspected home grown terror cell, were arrested on Thursday and Friday in Marignane, a town not far from Marseille in the Bouches-du-Rhone area of southern France.

According to reports by France’s TF1 and other media, the three were charged with terrorism offences late on Monday.

Currently only one of the three has been officially detained.

The arrests of the three men come almost a year after al-Qaeda inspired gunman Mohammed Merah began his killing spree in Toulouse and Montauban in which seven people were killed including, three Jewish children.

At a press conference on Monday Prosecutor François Molins said the three were armed and ready to strike on French soil in a bid to emulate Merah.

“It was clear they were training themselves in making explosives based on a jihadist radicalization, a glorification of Mohamed Merah, and an affirmed desire to go into action,” prosecutor Molins said.

Molins told Reuters on Monday that his investigators had uncovered “a veritable laboratory for making improvised explosive devices,” at the home of one of the men, in the town of Marignane.

“Even if we had no evidence of a precise plan, the messages exchanged by the participants suggested the timetable could be accelerated,” Molins added.

Two of the suspects came to police attention when they sent a “threatening email” to US President Barack Obama in November last year.

On their Facebook pages, they had described themselves as "jihadists" and had posted around 20 extremist videos on their accounts.

On March 11th, 2012, Ibn Ziaten was the first victim of Al Qaeda-inspired gunman Mohammed Merah, who went on to kill two more French paratroopers, three Jewish children and a rabbi.

In December last year, Interior Minister Manuel Valls warned that there may be “dozens of other potential Merahs” in France.