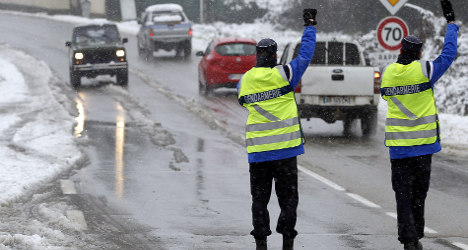 Around 47, 000 homes in parts of Normandy, northern France were left without power on Monday afternoon as heavy snow and strong winds battered the region.

Most of the power cuts hit the Manche region, where 42,000 homes were left without power.  Around 4,400 houses in the Calvados area also lost power because of the winter conditions.

"We should be able to get power back to most people by Monday evening," a spokesman for ErDF told Liberation newspaper. "The problem is getting enough teams around to vist the affected areas."

Earlier on Monday the country’s weather service Météo France placed 11 more department’s of north-west France on ‘orange alert’ – the second highest warning level— for snow and ice after already having put fourteen on alert earlier in the day.

The Ile-de-France area around Paris is included in the regions on alert.

With snow expected to continue falling overnight Monday and the following day, the warnings are due to remain in place until Tuesday evening.

Normandy is expected to be one of the worst affected areas where up to 20cm of snow is predicted. As well as heavy snow, strong winds of up to 100km/h are also forecast to hit the north and Brittany in the west, which Meteo France says may lead to snow drifts.

Etienne Kapikian, a forecaster with Météo France told French daily Le Parisien that to have such heavy snow falls in March was "exceptional".

The regions of Oise, Somme, Nord and Pas de Calais are also on alert. The weather front is expected to move south after Tuesday although it is not forecast to snow.

On Sunday night, police in the Paris region implemented traffic restrictions on drivers of large trucks, which prohibits them from overtaking or driving faster than 80km/h.

In the La Manche region of northern France authorities have decided to suspend all school transport for the day. Authorities in the Calvados region of Normandy took the same measure.

PARTNER CONTENT
Where are you going this summer? Why Malta is the perfect Mediterranean escape
Url copied to clipboard!